The Young and the Restless Spoilers: Summer Learns Lola’s Virginity Secret – Tempts Kyle With What Lola Won’t Give

BY hellodrdavis on January 26, 2019 | Comments: 5 comments
Related : Soap Opera, Spoiler, Television, The Young and the Restless 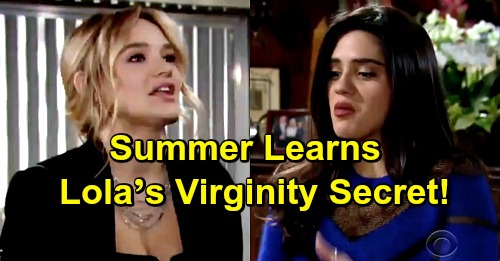 The Young and the Restless spoilers tease that Summer Newman (Hunter King) will come back to Genoa City with a singular goal in mind. When we last saw Summer, she bid farewell to Kyle Abbott (Michael Mealor), and it seemed that she had finally realized that Kyle was intent on moving forward with Lola Rosales (Sasha Calle).

But it seems that Summer hasn’t forgotten Kyle, and she’s coming back to GC to get him back. Perhaps Summer was hoping that Kyle and Lola would fizzle on their own, in her absence…and they almost did. But “Kola” are now using the “L” word on a regular basis, and it looks like they are on solid ground in their relationship.

But Kyle and Lola haven’t really been tested yet. Sure, they had the whole expensive handbag fiasco, which they worked through fairly quickly. But they haven’t had any real deep conflict yet in their relationship. And it looks like that’s where Summer will come in.

Y&R spoilers say that Summer will team up with Fenmore Baldwin (Zach Tinker) to weaken Kyle and Lola’s relationship. It looks like Summer will find out in pretty short order that Fen has a thing for Lola, and she’ll work to use that to her advantage to get to Kyle.

But what if Summer learns something else that could give her an advantage with Kyle? Summer’s a master eavesdropper, and it’s entirely possible that she could overhear Kyle and Lola talking about the one thing that they’d probably hate for her to know…that Lola’s a virgin and that they haven’t had sex yet.

Knowing Summer, she’d love that tidbit of information. She’d probably figure that sex was her best bet to getting Kyle back. She might try to tempt Kyle with seductive talk and get him all riled up so that he really thinks he’s missing out on something by sticking with Lola.

We could even see Summer setting up a situation in which Lola just happens to catch Summer coming onto Kyle seductively and Kyle flirting back a little. Summer might even rub Lola’s nose in the “fact” that Kyle’s sexually frustrated and that Lola’s somehow failing to give Kyle what he needs.

We’ll see if Summer goes there, but if she does, then we could be looking at some real problems for Kyle and Lola. With Summer stirring the pot and making sex an issue, it might be more difficult for Kyle to be ok with Lola’s decision to wait to have sex.

Do you think that Summer will find out that Lola’s a virgin and use it to get to Kyle? Stay tuned to the CBS soap and don’t forget to check CDL often for the latest Young and the Restless spoilers, updates, and news.