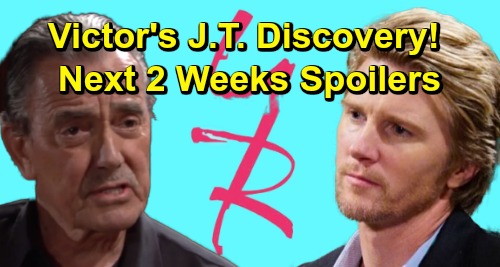 The Young and the Restless (Y&R) spoilers for the next 2 weeks tease that some stunning moments are coming up in Genoa City. First, let’s talk about Jack Abbott (Peter Bergman) and his nagging suspicions. He can’t help but feel like Kerry Johnson (Alice Hunter) is deceiving him. Kerry’s behavior is incredibly shady, so Jack’s about to decide he can’t take any more of it.

After finding a syringe in Kerry’s purse, Jack will turn to her for an explanation. She may opt not to give one at first, which may leave Jack more fed up than ever. Y&R spoilers suggest that Jack will deliver an ultimatum. He needs trust and honesty in a relationship. If Kerry can’t give him what he needs, they’ll have to part ways.

Meanwhile, Nikki Newman (Melody Thomas Scott) will let Katie Abbott (Sienna Mercuri) out of her sight for just a moment. It’ll end up being a serious error. The Young and the Restless spoilers say Katie will go missing, so kidnapping fears will emerge. Since Billy Abbott (Jason Thompson) already lost Delia Abbott (Sophie Pollono), he’ll be terrified over the possibility of losing Katie forever, too.

Billy’s fear will explode into anger, so he may blast Nikki for losing her grandchild. Nick Newman (Joshua Morrow) will have a hard time containing his own rage, so he may defend Nikki and face off with Billy. They don’t get along anyway, but this potential kidnapping tension could really rev up the conflict.

Summer Newman (Hunter King) will also make a comeback, so expect her to get on Kyle Abbott’s (Michael Mealor) nerves and scheme with Fenmore “Fen” Baldwin (Zack Tinker). While Fen and Summer plot against “Kola,” Lola Rosales (Sasha Calle) will grow concerned. She’ll worry that Kyle would be better off with Summer, but he’ll insist his ex is just a wrecking ball. Summer destroys everything in her path.

During the week of February 4-8, Summer will indeed make trouble. Kyle will have his work cut out for him as he struggles to keep his relationship on track. Next, Abby Newman (Melissa Ordway) will be pushed to her breaking point. She’ll most likely be sick and tired of Mia Rosales’ (Noemi Gonzalez) obsession with Arturo Rosales (Jason Canela).

The Young and the Restless spoilers say Abby will decide to take care of this once and for all. Since Arturo can’t seem to get his ex to back off, Abby will think she should handle it for him. However, she may find that’s easier said than done!

Over with Sharon Newman (Sharon Case), her loyalty will be put to the test. Phyllis Summers (Gina Tognoni) may revisit the idea of a two-way alliance, but Victoria Newman (Amelia Heinle) and Nikki Newman (Melody Thomas Scott) could always suggest a plot of their own. Will they want Sharon to double-cross Phyllis? Whatever the case, Sharon will feel like she’s being pulled in too many directions.

Finally, Victor Newman (Eric Braeden) will discover something shocking. Will it be new evidence at the ranch? Could it some sort of Katie clue about her ‘special’ friend or a hint about who framed him for J.T. Hellstrom’s (Thad Luckinbill) murder? One way or another Victor’s discovery will relate to J.T. according to Y&R buzz.

Y&R fans won’t want to miss all the action as February sweeps ramps up. We’ll give you updates as other news comes in. Stay tuned to the CBS soap and don’t forget to check CDL often for the latest Young and the Restless spoilers, updates, and news.