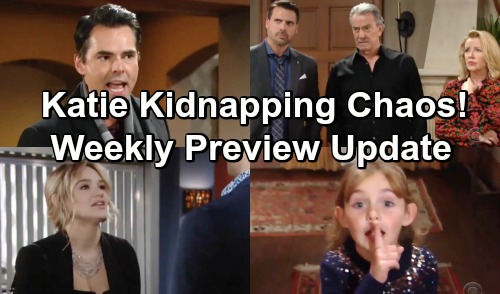 The Young and the Restless (Y&R) spoilers for the week of January 28-February 1 tease that we’ll see some couple drama as well as some family chaos. For starters, Jack Abbott (Peter Bergman) will remain cautious when it comes to Kerry Johnson (Alice Hunter). He just won’t be able to shake the feeling that she’s deceiving him.

Nevertheless, Jack will at least give Kerry a chance. He’ll invite her to the engagement party he throws for Abby Newman (Melissa Ordway) and Arturo Rosales (Jason Canela). Kerry won’t do herself any favors at this small gathering. She’ll sneak off to make suspicious texts, so Jack will grow increasingly frustrated.

Later, Jack will pick up Kerry’s handbag and spot a syringe inside. He’ll realize they need to have a completely honest discussion ASAP. When Kerry keeps trying to spin stories, Jack will contend that maybe she’s with the wrong guy. Since Jack’s been burned by secrets too many times, he just can’t put up with this.

Will Kerry break down and divulge her true secret? Will she find another way to keep stringing Jack along? Regardless, some conflict is ahead for these two. Over with Kyle Abbott (Michael Mealor) and Lola Rosales (Sasha Calle), they’ll also face some conflict. Y&R spoilers reveal that a hurricane will hit Genoa City – and her name’s Summer Newman (Hunter King).

Kyle won’t be pleased to see his ex, but Summer will be more determined than ever to get him back. You can bet Summer will push Lola’s buttons and plant some doubts. The Young and the Restless spoilers say Lola and Kyle will argue about what’s best for him. She’ll feel like Summer can give Kyle what he wants. Lola isn’t ready to have sex yet, but Summer would gladly strip down on command.

However, Kyle has fallen head over heels for Lola. He won’t be giving her up quite that easily, so Summer will have to team up with Fenmore “Fen” Baldwin (Zach Tinker). Since Fen wants Lola and Summer wants Kyle, they’ll set the mutual goal of destroying Lola and Kyle’s romance.

Other Young and the Restless spoilers say Katie Abbott (Sienna Mercuri) will give Victor Newman (Eric Braeden) a scare at the ranch. She’ll disappear briefly so her family will fear she’s kidnapped, but he’ll find her upstairs talking about her special friend. Victor will be perplexed since no one will be around, but he may think Katie’s just got an imaginary pal.

Whatever the case, that won’t be the worst shocker this week. Nikki will also let Katie out of her sight, so the kid will go missing once again. This time Katie won’t be found quickly. The Young and the Restless spoilers say Victoria Newman (Amelia Heinle) and Billy Abbott (Jason Thompson) will be in total panic mode. They’ll fret over this possible kidnapping as Billy faces a grim reminder of the past.

As Nick Newman (Joshua Morrow), Victor and Nikki stand there looking worried, Billy will go on a tirade. He’ll insist that he can’t lose Katie like he lost Delia Abbott (Sophie Pollono). Has Katie really been kidnapped or was there some miscommunication? The Young and the Restless spoilers hint that some twists are brewing, so stay tuned.

It sounds like another great week’s coming up in Genoa City. We’ll give you updates as other Y&R news comes in. Stick with the CBS soap and don’t forget to check CDL often for the latest Young and the Restless spoilers, updates, and news.