The Young and the Restless Spoilers: Summer and Fen Join Forces – Tear Kyle and Lola Apart for Good

BY Heather Hughes on January 24, 2019 | Comments: one comment
Related : Soap Opera, Spoiler, Television, The Young and the Restless 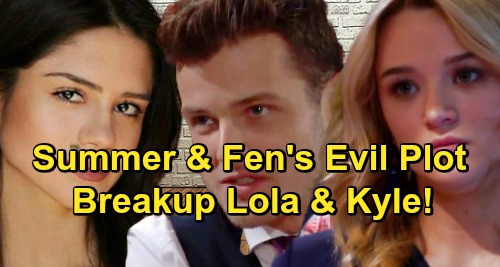 The Young and the Restless (Y&R) spoilers tease that Summer Newman (Hunter King) will be up to her old tricks. She’s headed back to Genoa City starting January 29, so several GC residents should be prepared for drama. For starters, there’s Billy Abbott (Jason Thompson). He already regrets sleeping with Summer as part of his plan to get back at Phyllis Summers (Gina Tognoni), but he could live to regret it even more.

It seems likely that fling with Summer will become public knowledge. It’s sure to shake up Billy’s life as well as Summer’s. Of course, Summer may not care too much. She may think Billy deserves to suffer, so a little humiliation may be worth it to her. If it scores sympathy points from Kyle Abbott (Michael Mealor), that’s even better.

Summer had some moments of maturity before she left town, but that was apparently just an act. This schemer’s as sneaky as ever and she’ll prove it during this return stint. The Young and the Restless spoilers say Summer will come back with a goal to accomplish. She’ll have a specific reason for catching a flight home.

It looks like the purpose of Summer’s return will be to win back Kyle. It makes sense considering she was so hung up on him when she exited. Summer wasn’t interested until Kyle shifted his interest to Lola Rosales (Sasha Calle). It’s clear that Summer wants what she can’t have, so now she’s decided Kyle is the air she breathes. He’s the one who got away and Summer can’t rest until she reels him back in.

Y&R spoilers say Summer will be disappointed when she first pops back up. She was probably hoping Kyle and Lola would’ve fizzled by now. It’s too bad Summer wasn’t around for the handbag fiasco! Lola dumped Kyle over the expensive purse he bought her for Christmas. Summer, on the other hand, would’ve let Kyle buy her as many handbags as his heart desired.

Nevertheless, Kyle and Lola are past all that now. Lola should’ve been the sorry one if you ask us, but it was Kyle who groveled and won back his love. That means Summer will come home to find Kyle more smitten than ever. She’ll realize she’s going to need backup if she wants to tear Kyle and Lola apart.

As luck would have it, the perfect partner in crime is waiting for Summer. Fenmore “Fen” Baldwin (Zach Tinker) thinks Lola would be better off with him. He had hope after that New Year’s Eve kiss, but it was quickly snatched away. After a chat with Summer, Fen may realize his dreams aren’t so dashed after all. Summer may suggest that they could help each other out.

The Young and the Restless spoilers say Fen and Summer will indeed team up. They’ll join forces on this breakup mission and hope they both get what they want. Unfortunately, this plot is awfully risky. There’s a good chance Summer and Fen’s scheme will backfire spectacularly or at least come with unexpected complications.

Some shockers are brewing, so Y&R viewers won’t want to miss the chaos ahead. We’ll give you updates as other news comes in. Stay tuned to the CBS soap and don’t forget to check CDL often for the latest Young and the Restless spoilers, updates, and news.