BY Marcy Cohen on January 22, 2019 | Comments: one comment
Related : Soap Opera, Spoiler, Television, The Young and the Restless 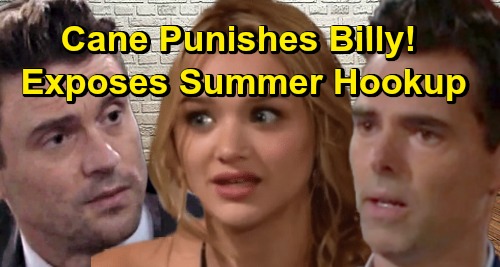 The Young and the Restless (Y&R) spoilers tease that a disaster’s brewing for Billy Abbott (Jason Thompson). He provoked Cane Ashby’s (Daniel Goddard) fury by telling Lily Ashby (Christel Khalil) about those lip locks with Victoria Newman (Amelia Heinle). It won’t be long until Cane forms a plan to make Billy pay.

Cane would be wise to let Billy and Victoria patch things up first. She isn’t happy about being Billy’s rebound, but he’ll maintain that she’s his true love and the only one he wants. Victoria may buy that eventually, but she’ll also have to get past the pain Billy caused. Blabbing to Lily for revenge may not have been the best decision.

Nevertheless, Billy believes he’s meant to be with Victoria. During new Y&R episodes the week of January 28-February 1, Billy will be determined to make this happen. He’s proven to be awfully persistent when it comes to matters of the heart. Billy will do whatever he can to win Victoria over and hopefully get their romance back on track.

Since Billy has been Victoria’s rock lately, she should get on board sooner or later. Victoria is desperate for any kind of stable ground. The rest of her life is such a mess, so she wouldn’t mind feeling cherished and taken care of. Billy can deliver that right now, so an official reunion will be tempting. They may get back together and start an exciting new chapter in their love story.

However, a couple of threats could collide and stir up trouble. Cane already wants vengeance, but Summer Newman (Hunter King) is on her way back to Genoa City, too. She’ll arrive home on January 29, so that should bring some complications. The Young and the Restless spoilers say Summer will have a specific goal in mind. It may or may not involve Billy, but he can’t escape the past either way.

Billy regrets hopping in bed with Summer to get back at Phyllis. Summer envisioned a real relationship with Billy, so she was crushed to find out he used her. Phyllis has done a good job of keeping a tight lid on that to protect her daughter, but that may not be an option for much longer.

Cane might become privy to this secret and use it to his advantage. It could do some serious damage in town. Cane could easily paint Billy as someone who violated Summer, even though it was a consensual encounter. It’ll at least look sleazy and manipulative, so Billy’s bound to face backlash from his family, friends and of course, Victoria. That’s her niece Billy was getting it on with!

This could affect Jack Abbott’s (Peter Bergman) relationship with Billy as well. He won’t be happy that his brother sank so low. Naturally, this will revive Nick Newman (Joshua Morrow) and Billy’s war. Nick will be furious after all this explodes and Summer’s caught in the chaos.

Once Summer’s in GC again, it’ll be the perfect time for everything to blow up. Summer really needs to be around for all the fierce faceoffs. Some Y&R fans still think Summer might return pregnant with Billy’s baby. If so, that could certainly add to Billy’s woes.