The Young and the Restless Spoilers: Wednesday, January 23 – Nikki’s Claws Come Out – Victoria Sides with Cane Against Billy

BY Heather Hughes on January 22, 2019 | Comments: one comment
Related : Soap Opera, Spoiler, Television, The Young and the Restless 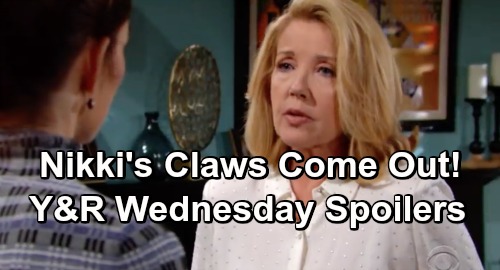 The Young and the Restless (Y&R) spoilers for the Wednesday, January 23, tease that Victoria Newman (Amelia Heinle) and Cane Ashby (Daniel Goddard) will have a lot to discuss. They couldn’t keep their lips off each other for a while there, but it looks like they’ll control themselves this time. They’ll most likely want to talk about Billy Abbott (Jason Thompson) and his shocking, vengeful move.

Cane may bring Victoria up to speed on how far Billy went. He’ll still be fuming over Billy’s decision to visit Lily Ashby (Christel Khalil) in prison and spill the news of their kissing fling. It’s not like Cane and Victoria have real feelings for each other yet. In fact, their first make-out session was fueled by rage.

These are vulnerable people who have been stressed to the max, so they just chose the wrong coping strategy. It’s clear that Cane still loves Lily and wants to be a good husband. However, he really should’ve just sucked it up and realized that Lily’s the one who’s truly suffering. Now she’s suffering even more thanks to Cane’s betrayal.

Victoria will feel guilty for contributing to all this, but she’s had way too much on her plate. The J.T. Hellstrom (Thad Luckinbill) cover-up chaos was bad enough, but then she had to face Reed Hellstrom’s (Tristan Lake Leabu) hit-and-run drama, Victor Newman’s (Eric Braeden) arrest, new evidence surfacing at the ranch and Billy rebound fears. It’s not surprising Victoria went off the rails a bit.

Nevertheless, The Young and the Restless spoilers say Cane and Victoria will hope to move forward. They’ll find several things they agree on in Wednesday’s new Y&R episode, January 23. The list will probably include being critical of Billy’s actions. Lily deserved to know what was going on behind her back, but it’s also a shame she had to know now. It doesn’t change anything except making Lily’s life more miserable.

Of course, Cane could be the one facing misery if Lily files for divorce. He’ll know it’s a very real possibility, but he’ll try to be positive. In the meantime, Cane and Victoria should probably steer clear of each other. It’s too early to say if they actually will! Their complicated spark could lead to more trouble and a deeper connection down the road.

Other Young and the Restless spoilers say Nikki Newman (Melody Thomas Scott) will grow impatient. She’ll fly off the handle over something and decide the claws need to come out. We all know how Nikki can be when she unleashes her wrath!

There’s a good chance Sharon Newman (Sharon Case) will be wrapped up in this somehow. She was hesitant to form a secret alliance with Phyllis Summers (Gina Tognoni), but we know something will change her mind soon. Perhaps Nikki’s behavior will be enough to convince Sharon that the Newmans are the real threat.