The Young and the Restless Spoilers: Cane Attacks Billy – Vows Revenge For Disclosing Kiss With Victoria to Lily

BY hellodrdavis on January 20, 2019 | Comments: 2 comments
Related : Soap Opera, Spoiler, Television, The Young and the Restless 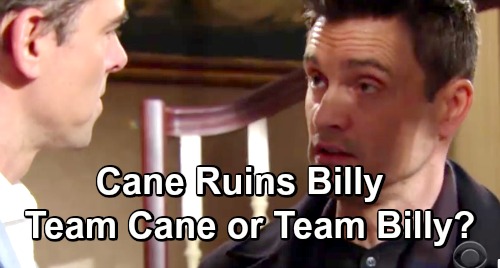 The Young and the Restless spoilers tease that Billy Abbott (Jason Thompson) is in for a major beatdown. Cane Ashby (Daniel Goddard) is about to kick off a major feud with Billy. Cane and Billy generally stay away from each other, but some recent developments have pitted them directly against one another.

Billy recently walked in on Cane and Victoria Newman (Amelia Heinle) kissing in Victoria’s living room. Billy was shocked, and he was even more shocked when Victoria admitted that it was not the first time they’d kissed. This sent Billy into a jealous spiral. Billy wants nothing more than to get back together with Victoria, and suddenly Cane has popped up as an obstacle to that reunion.

Billy was peeved with Cane and decided it was payback time. He took the Jabot jet to Lily Ashby’s (Christel Khalil) prison and told Lily all about Cane and Victoria’s kisses. Of course, Lily was devastated and now she thinks that Cane is cheating on her again. Cane arrived at the prison hours later, only to learn that Billy had visited earlier that evening.

B&B spoilers say that now Cane’s going to be out for blood. It will anger him beyond belief that Billy went running to Lily and told her about what happened with Victoria before he had a chance to do so himself. Now there’s the good chance that Lily won’t see or talk to Cane again, and there will be nothing that he can do about it.

So, Cane will make a beeline directly to the Abbott estate, and when Billy opens the door, Cane will sucker punch him. Look for a heated exchange between the two men as Cane attacks and Billy tries to defend his decision to spill the salacious details to Lily.

Billy will probably say that he just thought his friend Lily should know what her cad of a husband was doing while she was sitting in prison, but that will only serve to make Cane angrier. Cane will vow revenge on Billy for his actions, probably when Billy’s least expecting it.

You can bet that Cane won’t soon forget about what Billy did, and he may set out to somehow sabotage Billy’s relationship with Victoria, or perhaps he’ll find some other way to exact his revenge. What do you think Cane will ultimately do for revenge? Stay tuned to the CBS soap and don’t forget to check CDL often for the latest Young and the Restless spoilers, updates, and news.