BY Heather Hughes on January 20, 2019 | Comments: one comment
Related : Soap Opera, Spoiler, Television, The Young and the Restless 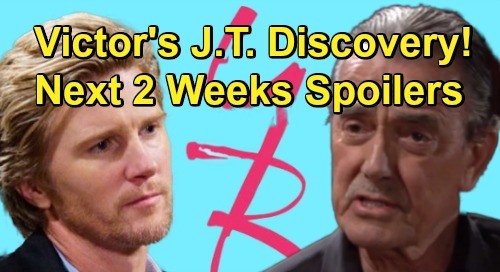 The Young and the Restless (Y&R) spoilers for the next two weeks tease that some stunning moments are on the way. During the week of January 21-25, Lily Ashby (Christel Khalil) will learn the despicable truth. Thanks to Billy Abbott’s (Jason Thompson) visit, Lily will know Cane Ashby’s (Daniel Goddard) been locking lips with Victoria Newman (Amelia Heinle).

There’s a good chance Lily will either refuse to see Cane from now on. She may get a divorce underway, but Cane won’t know what he’s up against just yet. He’ll just know he hates Billy with a passion for blowing up his marriage. Cane will throw a fierce punch right at Billy’s face. He’ll vow revenge, so Billy had better watch out. Cane could come for him when he least expects it!

Later, Cane and Victoria will reach an understanding. Maybe they’ll agree that their ill-advised kisses have to stop. They may feel foolish for making out in the first place. It’s not like they’re even really fond of each other.

Victoria and Cane don’t harbor quite as much hatred as they used to, but it’s clear that they’re not actually falling in love…yet. That could change down the road, but they’ll focus on other things for now. Victoria will be tied up in cover-up crew chaos this week. The alliance is starting to split and that can only spell trouble.

Later, The Young and the Restless spoilers say Sharon will decide Phyllis is right. They can’t trust the Newmans, so their new pact will kick off. At Rey Rosales (Jordi Vilasuso) and Mia Rosales (Noemi Gonzalez) vow renewal, Arturo Rosales (Jason Canela) will make a bold move. He’ll leave Abby Newman (Melissa Ordway) and everyone else in shock when he proposes.

Mia will think this is a blatant attempt to rain on her parade and spark jealousy. She probably won’t be wrong about that, but Arturo will just concentrate on Abby. He won’t want to mess up what he believes is the best relationship for him. Of course, that won’t stop Mia from stirring the pot even more!

During the week of January 28-February 1, another round of drama will hit. Victor Newman (Eric Braeden) will make a startling discovery, but what will it be? Will he realize someone’s spying on his home through video surveillance? That seems like a good option here. Victor is under house arrest, so there’s not much else for him to do except look around the ranch and spot problems.

Other Y&R spoilers say Devon Hamilton (Bryton James) will nudge Ana Hamilton (Loren Lott) into the limelight. Unfortunately, that’s not where she wants to be. This could lead to some conflict and hopefully put Devon closer to that songwriter shocker. He may even know Ana’s behind the hit song by then. That would explain why he’s trying to make a superstar out of her, but Ana isn’t going to approve.

Over with Fenmore “Fen” Baldwin (Zach Tinker), he’ll rub Kyle Abbott (Michael Mealor) the wrong way. Kyle’s getting a lot out of his relationship with Lola Rosales (Sasha Calle), but Fen may taunt him about what he’s not getting. If Fen realizes sex is off the table, you can bet he’ll tease Kyle about it. This feud is set to explode soon enough.