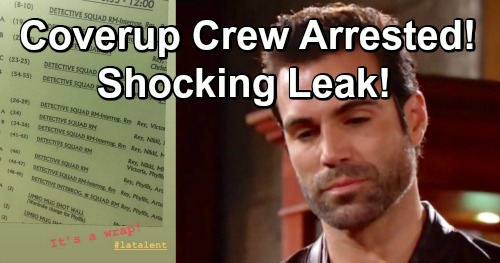 The Young and the Restless (Y&R) spoilers tease that some leaked info points to the shocking conclusion of the deadly J.T. Hellstrom (Thad Luckinbill) saga. Of course, there’ll still be the matter of who planted the evidence and framed Victor Newman (Eric Braeden). J.T.’s body is still unaccounted for as well, so there’ll be some twists and turns left to play out.

However, it appears the jig may be up for the girls’ night gang soon. Some sort of call sheet surfaced on social media and it offers a glimpse of what’s ahead. For starters, it tells us the key players in some upcoming scenes at the police station. That’s the biggest clue that this revolves around the cover-up crew’s exposure.

Rey Rosales (Jordi Vilasuso) will be featured in detective squad room scenes along with all the suspects you’d expect. Sharon Newman (Sharon Case) will end up in the interrogation room with Rey. Nikki Newman (Melody Thomas Scott, Victoria Newman (Amelia Heinle) and Phyllis Summers (Gina Tognoni) will also find themselves getting grilled.

Christine Williams (Lauralee Bell) will also be on hand to file charges. The Young and the Restless spoilers state that Phyllis will get a wardrobe change and have her picture taken next to a mug shot wall. The names next to Phyllis’ are cut off, but we’d say her partners in crime will go down, too. It’s tough to imagine Phyllis would take the fall on her own.

Even if Victor Newman (Eric Braeden) tried to set Phyllis up, Sharon probably wouldn’t let that happen. Her guilty conscience would be too much to bear. Of course, Victor could frame them both, but would Nikki and Victoria really go for that after everything they’ve been through together? It was their drama that got Sharon and Phyllis into this mess in the first place, so it’s doubtful.

In the end, the cover-up crew may just tell the truth. Unfortunately, they may not be believed. Rey’s eager to pin this murder on someone, even though it wasn’t a murder at all. Nikki was simply defending Victoria from J.T.’s attack, but it doesn’t look that way since they’ve kept it a secret for nearly a year. Rey’s bound to feel angry and betrayed by Sharon, so that could factor in.

We also have to mention a couple of surprising names that popped up here. For some reason, Arturo Rosales (Jason Canela) and Mia Rosales (Noemi Gonzalez) will get tangled up in all this. It’s too early to say how all the Y&R puzzle pieces will fit, but there are some good options.

For example, Mia might cheat with Arturo and get caught by Sharon. If Sharon exposes that to Rey and Mia manages to score the ultimate dirt, she could get revenge by exposing Sharon’s secret, too. There’ll have to be some way for all these Rosales family members to get in on the action!