The Young and the Restless Spoilers: Monday, January 21 Update – Lily Disgusted by Cane’s Betrayal – Mia Pushes Abby to Her Limit 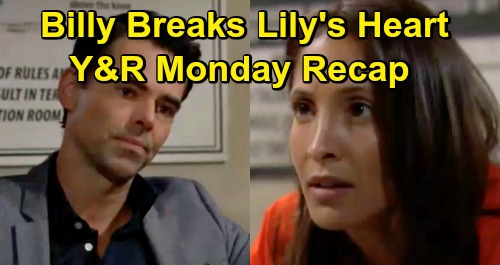 The Young and the Restless (Y&R) spoilers update and recap for Monday, January 21, tease that Billy Abbott (Jason Thompson) will beat around the bush. In the prison visiting area, Lily Ashby (Christel Khalil) will wonder why Billy flew all the way over on the Jabot jet. He’ll mention some big news stories in Genoa City, but Lily will want Billy to be honest. She’ll think there must something important to divulge.

Billy will finally admit that he caught Cane Ashby (Daniel Goddard) kissing Victoria Newman (Amelia Heinle). He’ll inform Lily that they’ve kissed before and neither one of them was drunk. Billy will be sorry that he came, but Lily will think he made the right call. She’ll be disgusted, but she’ll be grateful to be in the loop. Lily will promise to keep trying to survive in there no matter what.

Later, Cane will arrive and hope he can patch things up with Lily. Their last visit was tense, so Cane will at least want to apologize – even if he keeps his biggest secret. Unfortunately, Cane will soon realize that Lily already knows. He’ll learn that Lily can’t have any more visitors today because Billy Abbott just left.

At Crimson Lights, Mia Rosales (Noemi Gonzalez) will needle Arturo Rosales (Jason Canela) as he dotes on Abby Newman (Melissa Ordway). He’ll have flowers for his love, but Mia will think he just feels guilty about the other night. Arturo will shut down that idea and maintain that Abby is the only woman he wants a future with.

After Rey Rosales (Jordi Vilasuso) shows up, he’ll share some tender moments with Arturo. They’ll acknowledge that their relationship was rough in the past, but they’ll be glad they’re back on track. The Young and the Restless spoilers say the brothers will hug as they hope for bright futures.

Back with Mia, she’ll rub Abby the wrong way by mentioning that furnace fix. Mia will imply that there was more than just a repair going on. Abby won’t believe it, but she’ll still be riled when she catches up with Arturo later. He’ll encourage Abby to let it go and trust that she’s the one he wants.

Next, Arturo will confront Mia at her apartment. They’ll bicker about her pushing Abby’s buttons until Rey walks in. Arturo will almost tell Rey what Mia’s been up to, but she’ll distract her hubby with a vow renewal idea. Y&R spoilers say Rey will love it. He’ll let Mia know that nothing would make him happier, so Arturo will keep his mouth shut for now.

Sharon won’t think Nick Newman (Joshua Morrow) would go for that, but Phyllis won’t think it matters what Nick wants. Victor’s decision will be the one that sticks.

Besides, Phyllis will think Nick would go along with just about anything to protect Nikki Newman (Melody Thomas Scott). She’ll want a secret partnership with Sharon to save themselves. Phyllis will think they have to stick together or the Newman clan will take them down for this.