The Young and the Restless Spoilers: Phyllis and Sharon’s Secret Explodes, Nick Learns the Whole Truth 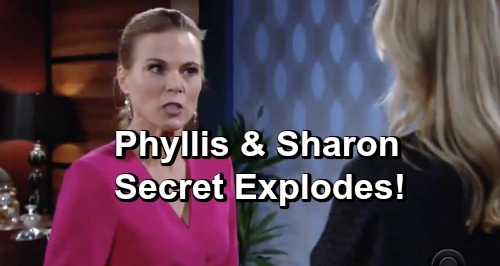 Phyllis knows Nikki Newman (Melody Thomas Scott) is the reason for that. She just doesn’t know how much Nikki might’ve spilled. Of course, Y&R spoilers say there’s an easy fix here. Phyllis can just have a little chat with Nikki and find out for herself. However, that won’t solve the problem of what Nick has learned. Phyllis may worry about Nick being way too close to the whole truth.

Nikki chose to leave Sharon Newman (Sharon Case) and Phyllis out of this mess. She must feel like that’ll work out well for all of them. Nick doesn’t need to know how out of hand their cover-up crew chaos has gotten. Besides, Nikki owed it to Sharon and Phyllis since she was breaking their pact of silence. She’ll do her part to make sure Nick never learns the entire story, but that plan won’t pan out.

The Young and the Restless spoilers say Phyllis will be on the hot seat on next week’s new episodes, January 21-25, and Nick’s the one who’ll put her there. He’ll pummel Phyllis with questions, so this could easily be a grilling session about what Phyllis knows. If Phyllis lets one too many clues slip, Nick could realize she was in the loop on Nikki’s actions before him.

Naturally, that would lead to the question of why Nikki would share that news with Phyllis of all people. Since J.T. was last seen the night of Victoria Newman’s (Amelia Heinle) party, it shouldn’t be too hard for Nick to put the pieces together. He may realize burying J.T.’s body was a team effort. Nick may confront Phyllis about her part in the deadly mayhem and the drama that followed.

Fortunately, Nick won’t be blabbing to Rey Rosales (Jordi Vilasuso) about the core four. He cares about all parties involved, so there’s no reason for Nick to make trouble for them. Instead, Nick just might make trouble for himself. If Nick has to, he may be willing to take the fall for J.T.’s murder.