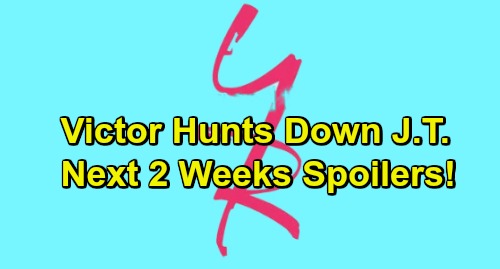 The Young and the Restless (Y&R) spoilers for the next two weeks tease that we’ll see unraveling secrets and exploding conflict. During the week of March 11-15, Devon Hamilton (Bryton James) will fret over Ana Hamilton’s (Loren Lott) finances. She’ll keep pestering him about selling more songs, so Devon will worry that her debt’s worse than he thought.

However, Devon will soon find that it’s the opposite. It turns out Ana isn’t in debt at all! Devon’s investigation will reveal that Ana’s been lying, so Devon will wonder what she needs all this cash for. He’ll fear that Ana’s got a gambling habit or some other addiction to support, but she’ll want him to butt out of her business. Devon will ultimately agree to respect Ana’s wishes, but he’ll remain wary.

Meanwhile, Mariah Copeland (Camryn Grimes) will have to watch as Tessa Porter’s (Cait Fairbanks) arrested. She’ll arrange bail, but she’ll fear that she’s just delaying the inevitable. The thought of both Sharon Newman (Sharon Case) and Tessa being locked up will leave her filled with dread.

It’ll be easier for Mariah to feel anger than to feel fear, so she’ll blast Nick Newman (Joshua Morrow) for his betrayal. He told Mariah he wouldn’t go to the cops, but he let Michael Baldwin (Christian LeBlanc) put Tessa on the stand. Tessa was forced to confess under oath, so Mariah will rip into Nick for hurting her like this.

Alas, Nick won’t have any sympathy for Tessa the blackmailer. It’d be nice if Mariah could mention Tessa had a good reason for needing quick cash, but it’s doubtful Nick would listen anyway. In the courtroom, a startling verdict will come in. There’ll be some sort of shakeup, but it still sounds like Nikki Newman (Melody Thomas Scott), Victoria Newman (Amelia Heinle) and Sharon will all be found guilty of harsh charges.

The women will receive visits from loved ones as they await sentencing. That’ll bring some peace, but Victor Newman (Eric Braeden) will want more. He’ll vow to make the person responsible for tormenting them pay. During the week of March 18-22, Victor will likely do just that! The Young and the Restless spoilers say he’ll pull off a shocking mission, so this could set up the return we’re all waiting for.

Will Victor confirm that J.T. Hellstrom (Thad Luckinbill) is alive? Will he track J.T. down and prove the ladies are innocent of murder? Victor will certainly give it his best shot. Y&R spoilers hint that Billy Abbott (Jason Thompson) and Nick may even pitch in. Their teamwork will prove helpful, which is probably great news for the girls’ night gang.

Over with Kyle, he’ll be newlywed after marrying Summer to secure a liver donation. That’ll leave Kyle to spill the truth to a recovering Lola Rosales (Sasha Calle). She’ll appreciate what Kyle did to save her life, but she’ll hate that a marriage is now standing in their way.

Finally, Devon will do a little more research and discover what Ana’s been hiding. He’ll confront her again once he nails down her real secret. The Young and the Restless fans won’t want to miss the hot drama. We’ll give you updates as other Y&R details emerge. Stick with the CBS soap and don’t forget to check CDL often for the latest Young and the Restless spoilers, updates, and news.