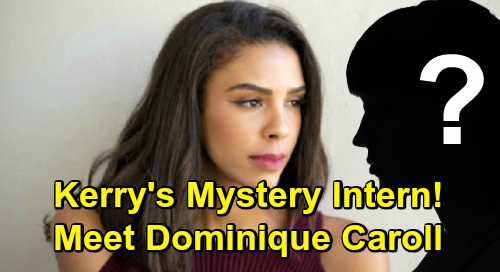 The Young and the Restless (Y&R) spoilers tease that Kerry Johnson (Alice Hunter) will have to hide the truth. She’s been in touch with her mysterious boss via texts and calls, but Jack Abbott’s (Peter Bergman) about to get huge hint. Kerry’s phone will ring while they’re together, so Jack will take a look at the caller ID. He’ll be intrigued when he sees that someone named “PC” is trying to contact Kerry.

When Kerry acts cagey, Jack will joke about her having a secret admirer. He’ll be trying to ease the tension, but he’ll end up causing more of it instead. The Young and the Restless spoilers say Kerry will snap at Jack for making accusations. They’ll undoubtedly exchange apologies afterward, but it’ll serve as one more incident to raise an eyebrow for Jack. He’s been a bit thrown by Kerry’s point of view lately.

Nevertheless, Kerry will stick to the plan. She’s come too far to blow this now! However, Y&R fans can expect a hiccup involving Kerry’s other target. We can’t forget that Kerry is duping Phyllis Summers (Gina Tognoni) as well, so that brings more opportunities to get caught. Kerry will have to smooth things over when Phyllis makes a surprising discovery at the office.

The Young and the Restless spoilers say Phyllis’ assistant will pass along some bizarre news. Phyllis will get updates on some mail that came for Dominique Caroll, but there’ll be no sign of her at Jabot. No one will have heard of this woman, so they certainly won’t know what department she works in.

Kerry will ultimately step forward to explain that she needed an intern. She’ll tell Phyllis that she hired Dominique, but that’ll make some waves. Does Kerry really have the authority to do that without Phyllis’ knowledge? Phyllis will likely object, but Kerry will downplay it as no big deal. She may contend that Dominique is just doing menial tasks and freeing up time for her.

Unfortunately, Kerry will be lying once again. It’s possible Dominique is an accomplice who’s been helping out with Kerry’s plot. After all, Kerry dashed off to meet someone in Genoa City one day after deceiving Jack. They could both be working for Kerry’s top-secret boss.

Then again, it’s possible Dominique IS Kerry’s boss – using a fake name of course. Just because she’s getting mail at Jabot doesn’t mean she’s actually there. Nobody except Kerry has seen her, so the meeting she went to could’ve involved this woman’s quick trip to town. “Dominique” may be due for another exciting popup, and this time it could be onscreen.

Regardless, this person has a huge secret that’ll really shake up Jabot. On March 29, Ashley Abbott (Eileen Davidson) will surprise her family by returning to GC. On April 1, Ashley will deliver a shocker. When you put the clues together, it seems likely that Ashley is the mysterious boss Kerry’s been working for. It sounds like they’ve been pulling the wool over Phyllis and Jack’s eyes!