The Young and the Restless Spoilers: Goodbye to J.T., Hello to Adam Newman – Hot Story Conclusion Builds to an Even Hotter Plot 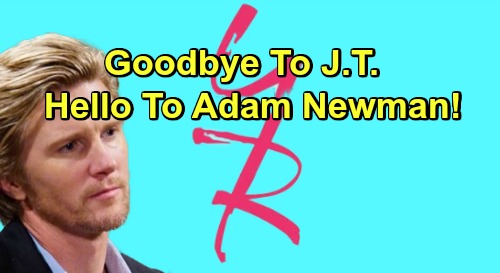 The Young and the Restless (Y&R) spoilers tease that J.T Hellstrom’s (Thad Luckinbill) reign of terror is almost over. He’s been tormenting Victor Newman (Eric Braeden) and the cover-up crew for months, but there’s probably a sympathetic explanation. All signs point to a brain tumor for J.T., so that may be an easy way for Y&R to rationalize his wild behavior and wrap everything up.

After Nikki Newman (Melody Thomas Scott), Victoria Newman (Amelia Heinle) and Sharon Newman (Sharon Case) are rescued, they’ll eventually wiggle out of legal trouble. They’ll still be facing obstruction of justice charges, but The Young and the Restless will manage to get them all back home where they belong. It won’t be long until their lengthy nightmare is a thing of the past.

This huge Y&R storyline was nearly a year long, so many viewers are eager to see it conclude. If you fall into that category, the end is in sight! The Young and the Restless spoilers say they’ll finish this off and head down a brand-new path.

Anthony Morina has taken over as Y&R’s executive producer and Josh Griffin stepped into the head writer spot, so it’ll be interesting to see what their version of the show looks like. We’ve already been seeing some story tweaks from Griffith, but he’ll have some big stories of his own hitting the screen soon. Naturally, at least one of those stories will involve Adam Newman’s comeback.

In other words, The Young and the Restless spoilers reveal that we’ll say goodbye to J.T. and hello to Adam Newman! Just when the Newmans settle down and believe life is getting back to normal, a presumed dead family member will return. Since Y&R has been working hard to find a solid recast, we have no doubt that they’ll find or have already found a great actor.

Once that actor debuts, the Newman action can heat up once again. Like the cover-up crew, Adam will also have some legal issues to take care of. After all, he was on the run when he was “killed” in that explosion. Adam assaulted a prison guard, but Y&R can clear that mess up. This is a soap, and you do what you have to do to make a story work.