BY Marcy Cohen on April 24, 2019 | Comments: one comment
Related : Soap Opera, Spoiler, Television, The Young and the Restless 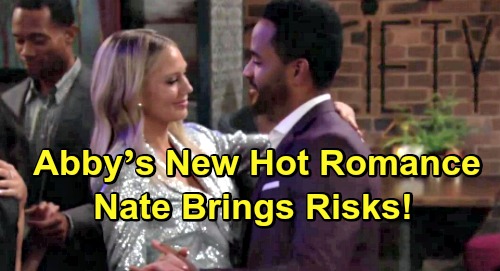 The Young and the Restless (Y&R) spoilers tease that Abby Newman (Melissa Ordway) will keep her successful streak going strong. Society’s opening night came with a few bumps in the road, but Abby ultimately had a lot to show for all her hard work. She feels like she’s found her calling, so she’ll continue to throw herself into the restaurant and making it Genoa City’s hotspot.

Arturo Rosales (Jason Canela) seems genuinely sorry for betraying Abby and potentially getting Mia Rosales (Noemi Gonzalez) pregnant, but sometimes sorry just isn’t good enough. Who’s to say Arturo would be able to avoid cheating again? Mia seems to have some kind of bizarre hold on him, so Abby’s wise to cut Arturo loose. She doesn’t need that kind of drama in her life.

That’s why Abby will hope to take a break from love and focus on work. She’ll think it’s for the best after all the pain she endured. Between nasty Mia and disloyal Arturo, no one can blame Abby for wanting a breather. However, sometimes the best love stories come along when you least expect them.

The Young and the Restless spoilers say Abby will tell herself to concentrate on Society. There’ll be so much to do in these first few weeks of business, but hunky Nate and his sweet smile will be hard to resist. Will Abby take a chance on love again? Will she throw caution to the wind and just go for it?

Nate and Abby could easily have a steamy romance, but it may be tricky since Ana Hamilton (Loren Lott) needs a love interest, too. This could turn into a love triangle down the road, which might lead to more heartache for Abby. The Young and the Restless spoilers say Abby will have to be careful as she moves forward with Nate, but sometimes love is worth the risk!

Are you on board with Abby and Nate as a couple? Do you think they could have a happy, long-lasting relationship? We’ll give you updates as other Y&R news comes in. Stay tuned to the CBS soap and don’t forget to check CDL often for the latest Young and the Restless spoilers, updates and news.