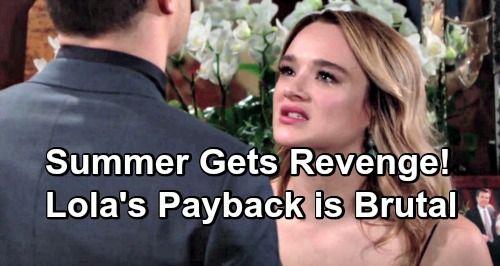 The Young and the Restless spoilers tease that Kyle Abbott’s (Michael Mealor) impulse marriage proposal, that led to Skyle’s wedding, has run its course. Finally manning up, Kyle tells Summer Abbott (Hunter King) that they should divorce, or seek an annulment.

The play-out at the Abbott mansion was set against Devon’s devastating find of Neil Winters (Kristoff St. John) at the penthouse and Victor Newman’s (Eric Braeden) talk with Victoria Newman (Amelia Heinle).

Summer truly believed that Kyle loved her more than Lola Rosales (Sasha Calle). That hasn’t been true since the moment Mr. Abbott first saw the owner of Living La Vida Lola working her food truck on the street outside of the building his family owned, as Kyle said on that first day.

The long series of events that led to Summer voluntarily donating half of her liver to Lola appears to have reached its end point. With a soapy nudge needed along the way, that being Summer as Lola’s only donor match, Y&R seems to be wrapping this part of the storyline that some expected to stretch at least through the spring.

The love locket proved to be the material symbol that finally pushed Skyle off. Nick Newman’s (Joshua Morrow) find of Kola kissing in the area outside of Society’s kitchen enabled Kyle and Summer to leave the opening of Abby Newman (Melissa Ordway) and Devon Hamilton’s (Bryton James) restaurant.

It felt pre-climactic to have Kyle admit the truth as quickly as he did. But he deserves credit for being straightforward with his wife. It’s true what Kyle says as well, that she’ll come to the same conclusion if she really thinks it through.

In retrospect, Phyllis Summers (Gina Tognoni) wasn’t completely wrong. While her diversionary tactics, in planning the spa getaway with Summer were a bit much, having Kyle trailed by a private investigator was on point and has since been vindicated.

Summer has matured this calendar year, but fans would be right to suspect that her current, understandable, flow of emotions could allow a temporary revival of the devolved edition of this character that first appeared last June, when King was written back into the show.

Kyle and Lola should therefore be prepared to face some type of reprisal, or more than one in the days and weeks ahead.

Y&R found a way to re-humanize Summer, who was turned into the brat King’s character said she knew people thought of her as. Hopefully, the soon-to-be former Mrs. Abbott finds peace of mind and someone more deserving of her time in the very near future.