BY Heather Hughes on April 24, 2019 | Comments: one comment
Related : Comings & Goings, Soap Opera, Spoiler, Television, The Young and the Restless 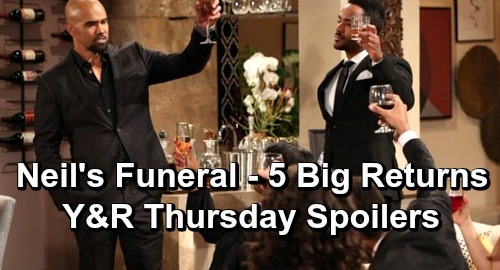 The Young and the Restless (Y&R) spoilers for Thursday, April 25, tease that the aftermath of Neil Winters’ (Kristoff St. John) devastating death will continue. Now that the news has spread, it’s almost time for Neil’s loved ones to gather and remember him. Devon Hamilton (Bryton James) will be a mess, so other Y&R characters will take the lead on funeral arrangements and reception plans.

Dr. Nate Hastings (Sean Dominic) will make sure everything’s good to go at the penthouse. Everyone will plan to meet back there after the memorial service concludes, so Nate won’t want Devon worrying about anything. While Nate handles that, Devon will hear the doorbell ring. He’ll head over to see who’s at the door and find a somber Malcolm Winters (Shemar Moore) staring back at him.

Y&R fans can expect some emotional moments as Malcolm and Devon embrace. They’ll hold each other close as they try to cope with Neil’s tragic passing. This was supposed to be a time of celebration with the new restaurant opening and Lily Ashby’s (Christel Khalil) release from prison. Instead, it’s turned into another nightmare for Devon to get through. He’ll definitely need Malcolm’s loving support.

The Young and the Restless spoilers say there’ll be some other special guests as everybody heads to the funeral. Angell Conwell will reprise her role as Leslie Michaelson while Julia Pace Mitchell shows back up as Sofia Dupre. Neil’s exes will always have a special place in their hearts for him, so they’ll return to honor his memory.

Neil’s son, Moses Winters (Dax Randall), will also be on hand in Thursday’s episode. Jess Walton will make a comeback as Jill Atkinson as well. Of course, we’ll also see plenty of Newmans, Abbotts and anyone else who cared about Neil. It’ll really be a full house as Y&R prepares to bid Neil a tearful farewell.

The Young and the Restless spoilers say many stories will be shared at this gathering, which is just the way Neil would want it. Perhaps Neil’s loved ones can find comfort in remembering his wonderful legacy. We’ll give you updates as other Y&R details emerge. Stick with the CBS soap and don’t forget to check CDL often for the latest Young and the Restless spoilers, updates and news.