The Young and the Restless Spoilers: Adam and Chelsea Save Christmas for Connor – ‘Chadam’ Family Overcomes Major Holiday Crisis

BY Heather Hughes on December 4, 2019 | Comments: one comment
Related : Soap Opera, Spoiler, Television, The Young and the Restless 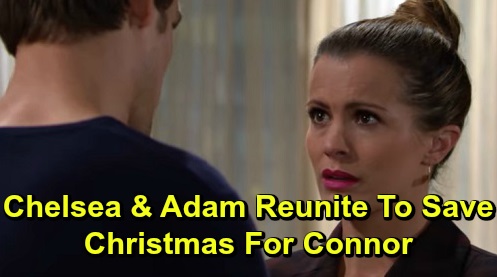 The Young and the Restless (Y&R) spoilers tease that Connor Newman (Judah Mackey) will continue to face some struggles due to his PTSD. Adam Newman (Mark Grossman) wasn’t sure it was a good idea for Chelsea Lawson (Melissa Claire Egan) to take Connor over to the Newman ranch for Thanksgiving, but he later admitted it was the right call. Chelsea assured Adam that Connor had fun, so it seems like it helped for the kid to do something normal.

Christmas is coming up, which will give Connor another chance at normalcy. Chelsea and Adam may feel like this is the perfect chance to lift the kid’s spirits. Most children love all the festivities this time of year – like Christmas music, holiday treats and waiting for Santa. Adam and Chelsea will probably hope Christmas can be a time of healing for Connor, but the plan will hit a big snag.

The Young and the Restless spoilers say there’ll be some worries as Christmas draws closer. Chelsea and Adam will find themselves in a position where they have to work together. That shouldn’t be a problem since they’ve committed to helping Connor. Chelsea even decided to move in with Adam, so they’re all in on giving Connor the support he needs.

As the holiday approaches, Chelsea and Adam will team up to save Christmas. There’s no word on why it’ll be jeopardy for Connor, but his parents will indeed believe it is. Of course, there are all kinds of ways for things to go wrong. The dinner might burn, and a holiday event or two might get canceled.

Connor’s presents might even get stolen if Chelsea stashes them at the Grand Phoenix to keep the kid finding them. It’s crisis central at that place! Maybe there’ll be some mad dash for Chelsea and Adam to buy more gifts. Then again, Connor might decide that Santa isn’t real and determine he’s not looking forward to any of this at all. The point is Christmas will be at stake, so Y&R fans can expect “Chadam” to save the day.

The Young and the Restless spoilers say Adam and Chelsea will undoubtedly pull it off, which could spark a real breakthrough for Connor. Will a “Chadam” family holiday be exactly what Connor needs? Will this set up a Chelsea and Adam reunion for the new year? We’ll give you updates as other Y&R news comes in. Stay tuned to the CBS soap and don’t forget to check CDL often for the latest Young and the Restless spoilers, updates and news.