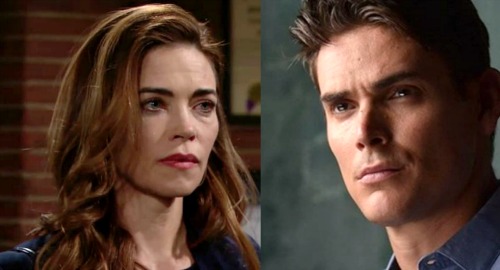 The Young and the Restless (Y&R) spoilers tease that Victoria Newman (Amelia Heinle) will feel like her life is finally straightening out. She endured J.T. Hellstrom’s (Thad Luckinbill) abuse before getting caught up in all the cover-up drama. Victoria was sentenced to prison before that final J.T. showdown and the stunning revelation that a brain tumor caused her ex’s behavior.

It’s easy to see why Victoria was on a downward spiral by the time she went to Vegas! Thankfully, Victoria will continue to heal and turn things around. She’ll take her relationship with Billy Abbott (Jason Thompson) slow like she planned and focus on her role at Newman Enterprises. Victoria will feel like her career is going just as well as her personal life for once.

However, Y&R fans can expect a major threat soon enough. The Young and the Restless spoilers say a company shakeup is brewing, so Victoria will be forced to defend her position. It sounds like Victor Newman (Eric Braeden) will doubt her abilities and show some love for another Newman instead.

Victoria has made herself top dog when it comes to Victor’s kids lately. Nick Newman (Joshua Morrow) can never stay loyal long enough to be Victor’s favorite. As for Abby Newman (Melissa Ordway), she’s been caught up in her own little restaurant world and tends to be treated like a second-class Newman anyway. It’s probably that Abbott side that holds her back!

Victoria, on the other hand, has been able to hang in there and prove herself at Newman Enterprises. She’s been a big help and will keep up the good work, but it probably won’t matter when Adam Newman (Mark Grossman) struts back into town. Victoria will soon have competition for the Newman throne – and a more ruthless than usual Adam may go after it hard.

Of course, everything Victoria’s been through has made her stronger than ever. She’s not some delicate flower who can be pushed around anymore. Victoria will show off her fierce side and prove she can hold her own. There’s no guarantee it’ll be enough to stop Adam from taking her spot, but Victoria will certainly play dirty and hope for the best.