BY Heather Hughes on April 25, 2019 | Comments: one comment
Related : Soap Opera, Spoiler, Television, The Young and the Restless 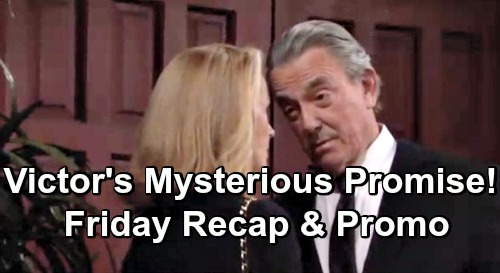 The Young and the Restless (Y&R) spoilers for Friday, April 26, tease that Malcolm Winters (Shemar Moore) will encourage a happier time of reflection. Neil Winters’ (Kristoff St. John) funeral brought some devastating moments, but Malcolm will want to celebrate at the reception. The guests will remember fond memories of Neil as they all chat at Devon Hamilton’s (Bryton James) penthouse.

After Ana Hamilton (Loren Lott) sings Neil’s favorite jazz song, everyone will recall Neil’s old club, which was called Indigo. Y&R fans will see a flashback of when Neil showed Devon around before purchasing it. Malcolm will eventually toast to Neil, so the rest of the reception guests will raise their glasses.

Next, Mariah Copeland (Camryn Grimes) will want Devon to know she’s always there for him. She’ll come running if he ever needs anything. Devon will be grateful for all the good things Neil brought to his life. He’ll feel like he owes Neil so much, so we’ll see a flashback of Neil urging Devon to follow his dreams.

Over with Jill Atkinson (Jess Walton), she’ll talk to Cane Ashby (Daniel Goddard) about his decision to leave Chancellor. Jill will be disappointed to learn Lily Ashby (Christel Khalil) is moving forward with the divorce, but Cane won’t give up. Malcolm will also praise Lily for finding the courage to make a speech at Neil’s memorial service. She’ll have a flashback as she recalls Neil being a source of comfort.

Billy Abbott (Jason Thompson) will also be on hand to embrace Lily and offer his condolences. She’ll be grateful that she got to see Neil as a free woman once more. Nearby, Victor Newman (Eric Braeden) and Jack Abbott (Peter Bergman) will chat with Devon about their respect for Neil. They’ll tease each other about which one discovered Neil first, so that’ll bring a little joy for Devon.

Ashley Abbott (Eileen Davidson) will have a tender conversation with Sofia Dupre (Julia Pace Mitchell) while Jill gets huge news. She’ll be ecstatic when Billy reveals that he’s reunited with Victoria Newman (Amelia Heinle). Over with Nick Newman (Joshua Morrow) and Sharon Newman (Sharon Case), they’ll talk to Lily about how hard Drucilla Winters’ (Victoria Rowell) death was for Neil.

Other Young and the Restless spoilers say Nikki Newman (Melody Thomas Scott) will reflect on her friendship with Neil. She’ll promise Lily that she’ll always have a friend in her, too. Mariah will catch up with Sharon soon after. She’ll be glad Neil and Hilary Hamilton (Mishael Morgan) were on good terms when she passed away. Mariah will worry about Devon, but Ana will vow to take care of him.

Back with Malcolm, he’ll have a flashback of his half-brother and admit he’s going to miss Neil so much. After Victor looks at his phone, he’ll let Nikki know they have to go. Victor will later admit that he has to leave town again, but he’ll assure a livid Nikki that answers are coming. He’ll think it’s best if Nikki doesn’t know anything right now, but he’ll insist it’ll all make sense soon.

After all the other guests say their goodbyes, only Neil’s family will remain. Malcolm will get everyone together for a group photo before he departs. Once Devon’s alone with Ana, he’ll confess he’d like some time to himself. Later, Elena Dawson (Brytni Sarpy) will find Devon crying and do her best to comfort him.

Meanwhile, Lily will insist on leaving Cane and Genoa City behind. She’ll note that Neil encouraged her to live the life she wanted. Despite Cane’s wishes, Lily will declare that she’s sorry and refuse to give him the reunion he wants.