BY Kinsley Goldman on April 25, 2019 | Comments: one comment
Related : Soap Opera, Spoiler, Television, The Young and the Restless 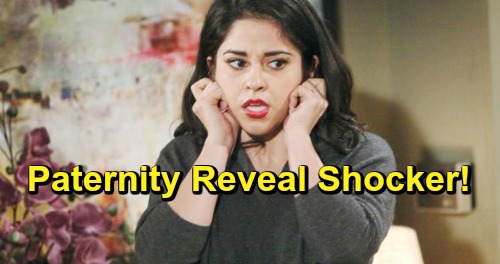 The Young and the Restless (Y&R) spoilers tease that Mia Rosales (Noemi Gonzalez) will keep stirring the pot. Despite Rey Rosales’ (Jordi Vilasuso) warning to straighten up and focus on the baby, Mia will be unable to resist targeting his new relationship. Even if she can’t have Rey, Mia certainly doesn’t want Sharon Newman (Sharon Case) to have him.

At this point, Mia would have a better shot with Arturo Rosales (Jason Canela). Abby Newman (Melissa Ordway) can’t get past Arturo’s betrayal, especially now that there’s a baby in the mix. Since that baby might belong to Arturo, there’s no way Abby would ever sign on for more drama. She’ll be cozying up to Dr. Nate Hastings (Sean Dominic) in the coming weeks instead.

That’ll leave Arturo to concentrate on fatherhood and the major life changes it could bring. Rey will also have Daddy duty on his mind. He’s always wanted to be a father, but the circumstances are clearly not ideal. Mia is the last person Rey wants to have a kid with. Plus, this complicates his romance with Sharon and could bring extra challenges if Rey’s bun is in the oven.

Arturo and Rey will wrestle with fears about the future, but they’ll just have to wait and wonder until a paternity test is done. Thankfully, that test is indeed coming up soon. The Young and the Restless spoilers say the paternity of Mia’s baby will be revealed during May sweeps.

Will this baby be Rey’s or Arturo’s? That probably depends on the outcome of Mia’s pregnancy. If Y&R wants to take the miscarriage route, it makes more sense for it to be Rey’s. That way he can grieve for the child he wanted to raise despite his or her crazy mother. It would matter more since Rey’s connected to Sharon and could lean on her.

The Young and the Restless could also go with Rey if they indeed to put Mia behind bars. Arturo would be a better option if they want to send both characters out of town. As CDL reported, Mia and Arturo are leaving, so that’s definitely a possibility to consider.

Of course, there’s no guarantee the first set of results will be the right ones! Just because the paternity will be revealed doesn’t mean it’ll be accurate initially. No one would be surprised if Mia resorted to some sneaky tactics. A last-ditch effort to keep Rey could come through an altered paternity test.