The Young and the Restless Spoilers: Mia and Arturo’s Exit – Leave Together as a Couple or Jail For Lola’s Attacker?

BY Sean O'Brien on April 17, 2019 | Comments: one comment
Related : Soap Opera, Spoiler, Television, The Young and the Restless 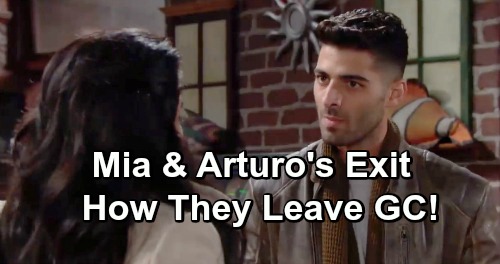 The Young and the Restless spoilers tease that Mia Rosales (Noemi Gonzalez) and the apparent father of her child, Arturo Rosales (Jason Canela), will exit by May. Plenty of drama will build until those dual departures, with unpredictable and therefore compelling finales ahead.

The Rosales’ family story began with Arturo, who was the first member to arrive in Genoa City, Wisconsin. He was followed by his brother, Rey Rosales (Jordi Vilasuso). A backstory was teased about conflict between them that was eventually revealed as having a name, Mia.

Lola Rosales (Sasha Calle) arrived in GC before her controversial sister-in-law appeared. Mia and Lola got along fine after Ria rebooted. So it will come as a mega surprise to Calle’s character that Mia was the person who created the circumstances that led to Lola’s coma and liver transplant surgery.

Arturo was just brought on board by Rey, in helping to cover the mistaken identity crime Mia committed. Neither man wants to see Mia locked up, as she could be the father of either man’s first child.

Y&R fans know that the exits of Canela and Gonzalez don’t necessarily mean that Arturo will be the dad. It could be the show’s plan to bring Mia back a handful of months from now, if Rey is tagged for father duty.

But it would seem easiest to wrap both character’s (Arturo and Mia) storylines by having them be the parents. There clearly was a spark between them in the past. Mia still has deep feelings for Arturo that go beyond those she has for Rey.

As for Arturo, his heartfelt acknowledgment and apology to Abby Newman (Melissa Ordway) made an impact. She actually agreed to give her recent fiance a second chance after reflecting upon past romantic mistakes she’d made. Then, Mia somehow located Arturo in the bowels of Abby’s newly forming restaurant and Abturo was through.

To be direct, it’s a shame that Gonzalez and Canela are departing, as they are both fine actors. As is true in sports, the new boss isn’t loyal to the past leader’s players.

Established stars aren’t often out in situations. Among the newer personalities, Mia and Arturo hadn’t had enough time to become vital to life in this fictional Wisconsin town. At least it seems that the two other fine actors who embody the remaining Rosales’ family members, Vilasuso and Calle, are staying.

Hopefully, news of Mia and Arturo’s child’s healthy birth is discussed by Rey and Lola six months from now. Possibly, depending upon Paul Williams’ (Doug Davidson) feelings and Rey’s actions, no one will be serving jail time either.