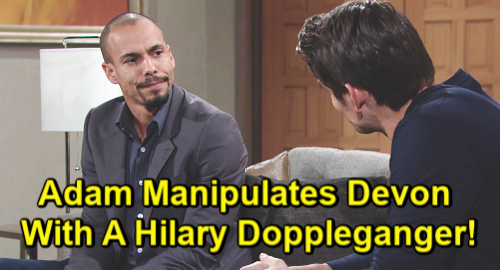 The Young and the Restless (Y&R) spoilers reveal that Adam Newman (Mark Grossman) may have another twisted plan in the works. No one should be surprised since Adam’s poisoning his own father! If Adam would tamper with Victor Newman’s (Eric Braeden) medication, there’s no line he won’t cross.

That could be important as we head into this story surrounding Katherine Chancellor’s (Jeanne Cooper) will. Y&R fans know Chance Chancellor has become the top suspect as the will challenger. Devon is perplexed since Chance used to be such a great guy. However, it’s clear that we’re dealing with a very different Chance. He’s been mixed up with Adam and that can only mean he’s bad news now!

Plus, we know Chance got arrested for assault at one point and was bailed out by Adam. That established their partnership, which may become clearer soon. Of course, it’s possible Adam didn’t have a hand in this, but why else would he work so hard to keep his connection to Chance under wraps? Something shady is going on here – in fact, many shady things could be going on here!

Mystery Lawyer Could Play A Huge Role In Upcoming Storyline

The Young and the Restless spoilers say this mystery lawyer could play a huge role in the drama. There was no picture of Amanda Sinclair when Devon researched this top-notch attorney.

He’s set to meet with Amanda soon, so she may already be in town. Perhaps Amanda even booked herself a room at the Grand Phoenix and was spotted by Devon before his panic attack on Tuesday.

Devon stepped out to get some air shortly before his crisis hit. Based on the puzzle pieces that are coming together and buzz about her return, Mishael Morgan may be playing this mysterious lawyer.

He may have already seen her, but Devon would assume this Hilary Hamilton (Mishael Morgan) lookalike was in his head like before. Y&R viewers know Devon has been “haunted” by Hilary on several occasions, and that’s been known to cause panic attacks.

Whatever the case, doesn’t hiring a Hilary lookalike as Chance’s attorney seem like a very Adam thing to do? It seems like the ideal way to mess with Devon’s emotions and get him off his game. Perhaps the plan is to lower Devon’s guard – or even have Amanda seduce him! She might do it for the right price.