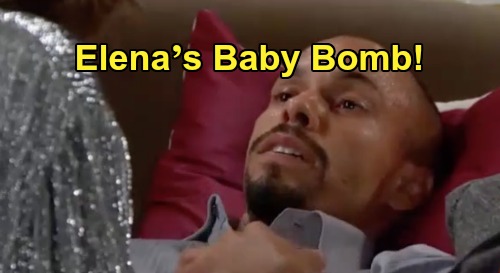 The Young and the Restless (Y&R) spoilers tease that Elena Dawson (Brytni Sarpy) will have a huge confession to make. She’ll deliver a shocker to someone on September 11, so a major bombshell’s coming up. We should mention that Genoa City will still be dealing with the aftermath of Zoe Hardisty’s (Anna Grace Barlow) handiwork. The Grand Phoenix opening will be a total disaster thanks to the drugged drinks and all the publicity chaos that’ll follow.

Paul Williams (Doug Davidson) will work to find the culprit, so he’ll be making some stunning discoveries along the way. Elena may make one of her own thanks to the bloodwork that’ll be required at the hospital. It looks like everyone at the party will have to be tested, which could bring the shocker we mentioned.

Will Elena find out she’s pregnant? Could that lead to her startling confession? Of course, Elena may not feel comfortable dropping a baby bomb on Devon immediately. Perhaps Elena could confide in Nate Hastings (Sean Dominic) first. They’ve become close friends, and Devon will already be trying to recover from a party panic attack. This isn’t the right time to just spring “I’m pregnant” on him.

Instead, Elena may open up to Nate and worry about how Devon will take the news. After all, Devon lost a baby with Hilary Hamilton (Mishael Morgan) just before her death. It could stir up some painful memories. Plus, it’s not like Devon and Elena are ready for this step in their relationship. They’re living together and getting more serious, but it definitely wasn’t the right moment to start a family.

However, Y&R babies always strike whenever they’ll cause the most drama! Since the appearance of Hilary’s lookalike character is probably just around the corner, that could make the situation even more complicated. This is the perfect opportunity for The Young and the Restless to create quite a mess!