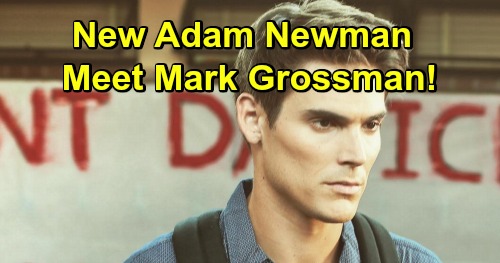 The Young and the Restless (Y&R) spoilers reveal that Adam Newman is headed back to Genoa City played by Mark Grossman. Ever since the show announced the hunt for a new actor, fans have been eager to see which hunk would land the exciting role. Adam is a crucial character, so Y&R didn’t want to rush the recast process.

The CBS soap had to make the right choice, especially since Adam’s previous portrayers were so popular. According for Daytime Confidential, it looks like an Adam recast has finally been selected. Y&R insiders insist that Mark Grossman has scored the coveted part, so there’s a good chance his debut is coming up.

Grossman is best known for his work on Freeform’s Famous in Love, but you might also recognize him from shows like Hustle or one of his many TV movies. There’s no word yet on when Grossman’s first airdate might be, but it should be interesting to see what he brings to the table. The Young and the Restless viewers will recall that Justin Hartley last played Adam Newman, but he left the show to pursue film and primetime work back in 2016.

The move paid off since Hartley scored the role of Kevin Pearson on NBC’s hit drama, This Is Us. Before that Michael Muhney portrayed the complicated Newman, but some scandals and behind-the-scenes drama led to his firing in 2014.

There was a huge push by Muhney’s fans to bring him back during this last recast search, but Y&R obviously wanted a fresh start. Now that Grossman’s name is out there, everyone can just look forward to his take on Adam and the excitement it’ll bring to GC.

The Young and the Restless spoilers suggest that Adam’s comeback will certainly stun his family. Victor Newman (Eric Braeden) should be thrilled over this upcoming reunion, but will Adam be just as overjoyed? Will old wounds lead to grudges and wars instead? Time will tell, but things could easily get rocky.

It sounds like there’ll be plenty of Adam-related storylines in the months ahead. What do you think of the new Adam Newman buzz? Do you think Mark Grossman is a solid pick? We’ll give you updates as other Y&R news comes in. Stay tuned to the CBS soap and don’t forget to check CDL often for the latest Young and the Restless spoilers, updates and news.

Jake has a new muse. Check out a new SNEAK PEEK from Wednesday’s episode of #FamousInLove. pic.twitter.com/Z4UHJYV3I6