The Young and the Restless Spoilers: Adam Steals Chelsea’s Heart – Nick and Victor’s Feud Back On as The Moustache Sides With ‘Chadam’ 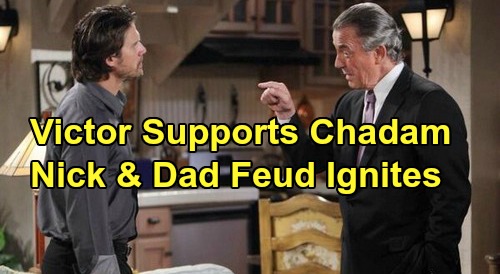 The Young and the Restless (Y&R) spoilers tease that Nick Newman’s (Joshua Morrow) love is slowly slipping away. Chelsea Newman (Melissa Claire Egan) seems poised to reunite with Adam Newman (Mark Grossman), which is sure to leave Nick heartbroken. He fell for Chelsea again pretty much from the first moment she stepped back in town, but “Chick” was never meant to last.

From the get-go, Y&R fans complained about the show ignoring Chelsea and Adam’s strong bond. It was out of character for Chelsea to suddenly be so wary of Adam. He eventually did things to prove Chelsea had a reason to be wary, but it was still an odd writing choice. Chelsea was firmly against reuniting with Adam, but it would’ve been nice for her to be a little torn!

Instead, Chelsea was eager to get back together with Nick, a flash-in-the-pan romance that only happened because Adam “died.” Chelsea has perhaps been in denial about how much she wants Adam. The Young and the Restless is thankfully shifting gears and bringing “Chadam’s” history into play. They’re also giving Adam and Chelsea experiences like the hostage crisis to bring them closer.

Of course, Connor Newman (Judah Mackey) is a big part of all this. He’s always going to connect Chelsea to Adam, and he certainly wants his parents to reunite. Based on Victor Newman’s (Eric Braeden) recent chat with Adam and Connor, he could be joining “Team Chadam” as well. Victor was pleasantly surprised to hear it was Chelsea’s idea for Adam to take a father-son trip with Connor.

That was obviously a cover to get Connor away from Simon Black’s (Jeffrey Vincent Parise) threat, but Chelsea still showed some faith in Adam. We should mention that Chelsea destroyed Nick’s campaign with her scandal, but Victor never really wanted Nick to run anyway. He was concerned about Nick’s personal reputation when all that blew up, but he’d probably be less concerned about Adam’s. Adam already has a bad reputation, so there’s really nothing to protect!

Besides, Victor may feel the need to put Adam first here. Although Victor’s had some issues with Chelsea, he surely knows a stable family life would be good for Adam. In the past, The Moustache’s been a troublesome spouse to Nikki Newman (Melody Thomas Scott), but they’ve always managed to come back to each other. Chelsea and Adam may have that same kind of love – the kind that always comes back around.

You can bet Nick will be angry with Adam for stealing Chelsea’s heart back piece by piece. Chelsea lied to Nick, but it’s not a mountain that’s too big to conquer. “Chadam’s” love, on the other hand, just might be. That’s especially true when Victor and Connor will be firmly in their corner.

During the week of November 18-22, Connor will battle stomach pains at the penthouse. Adam will call Chelsea, so she’ll tell Nick she has to be there for her son. Nick will assure Chelsea he’s OK with her packing a bag and moving in with Adam for a bit. However, it’s clear this is the beginning of the end for “Chick.” In the end, Victor may support Chelsea and Adam’s reunion wholeheartedly.

This is the kind of thing that could reignite the conflict between Nick and Victor. If The Moustache ends up betraying Victoria Newman (Amelia Heinle) and hands over control of Newman Enterprises to Adam, that could rile Nick up even more. We could see another serious family feud going on!