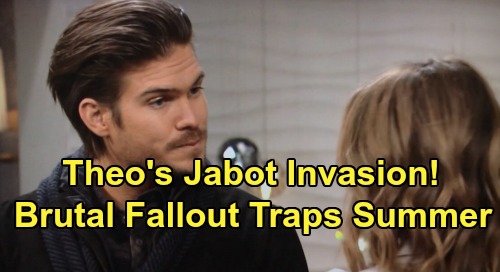 The Young and the Restless (Y&R) spoilers tease that Kyle Abbott’s (Michael Mealor) problem will get worse. Y&R fans know Kyle was deeply dismayed by the news that Theo Vanderway (Tyler Johnson) is his cousin. He thought Summer Newman (Hunter King) was losing interest and well on her way to cutting Theo lose. Kyle also felt like Theo’s career opportunities were drying up, which meant he was close to booking a return flight to New York.

Of course, learning Theo was Dina Mergeron’s (Marla Adams) long-lost grandson changed the game – both for Theo and the Abbotts. Theo actually seems to be doing some soul-searching and maturing a bit. However, Kyle has serious trust issues when it comes to Theo. It’s understandable under the circumstances, but Jack Abbott’s (Peter Bergman) about to make a move that exacerbates things.

Jack blew up at Ashley Abbott (Eileen Davidson) over her Paris job offer, which could take Theo out of the country before they ever get to know him. Naturally, Jack wants Theo to stick around and become a true family member. Theo will be tempted to take Ashley up on her offer, especially since his influencer agency is starting to tank hard. He keeps losing clients, so he’s going to need some cash flow.

That’s why Jack may make an offer of his own. After all, there’s a perfectly good office for Theo to work at right there in Genoa City. The Young and the Restless spoilers say Theo will wind up moving into Kyle’s territory. It sounds like he’ll become a Jabot invader after accepting a position there.

Summer didn’t want to choose sides in this growing war, but she may have to eventually. Between short-tempered Kyle and volatile Billy Abbott (Jason Thompson), this could be a recipe for disaster. Summer should find herself caught in the middle of the chaos that erupts. She may even find herself annoyed with Theo over this work invasion.

Jabot kind of serves as Summer’s safe space and fun friendzone right now. She treasures the private moments she shares with Kyle at the office, and she can’t have those with Theo around. Despite Theo settling down a bit, it could be all too easy to rile him back up – especially if Kyle and Billy push him too far. If Theo goes back to troublemaking, it could be a real issue for Summer.