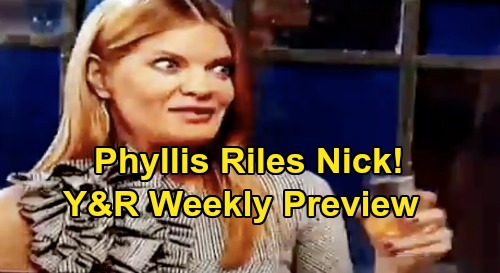 The Young and the Restless (Y&R) spoilers preview for the week of November 18-22 tease that the drama’s about to heat up in Genoa City. In a new preview video for next week, Phyllis Summers (Michelle Stafford) tries to get a reaction out of Nick Newman (Joshua Morrow). Y&R fans know Phyllis is the very definition of a troublemaker! She’ll definitely be stirring the pot in the week ahead.

Abby Newman (Melissa Ordway) warned Phyllis to stay away from Nick, but Phyllis practically took it as a challenge. Since everyone is so against her having anything to do with her ex, Phyllis suggested she might have to “hit that” again. It appears Phyllis will make her move – at least in a way.

During a chat with Nick at Society, Phyllis will remind him they’re two consenting adults and can do whatever they want. She’ll suggest that leaves it open. Nick may counter that he’s in a committed relationship with Chelsea Lawson (Melissa Claire Egan), but Phyllis may feel like her heart lies elsewhere.

There’s a good chance Chelsea will have moved in with Adam Newman (Mark Grossman) and Connor Newman (Judah Mackey) by the time this scene plays out. That could give Phyllis an angle to work. She may needle Nick about exes always being drawn back to each other and wonder if he’d like to have some fun.

Of course, this seems more like an attempt to rile Nick than anything, but Phyllis probably wouldn’t mind if he took her up on it. This may be a “kidding unless you’re down” situation. Nevertheless, Nick will likely put Phyllis in her place and take off. He won’t be interested at the moment, but who knows what might happen down the road?

Over with Phillip “Chance” Chancellor (Donny Boaz), he’ll set up a meeting with Abby so they can talk. Abby will look curious and a bit giddy as she asks what this is about. Chance will inform Abby that he’d like to make her an offer. Will it involve business or pleasure? Chance might even like to mix the two if he plays his cards right!

Other Young and the Restless spoilers say Jill Abbott (Jess Walton) will manage to locate Colin Atkinson (Tristan Rogers) in the Maldives. She’ll barge in his suite and yell, “come out, come out wherever you are.” Jill will clearly be annoyed over having to chase Colin across the globe, but this is important. She’ll be determined to get to the bottom of Katherine Chancellor’s (Jeanne Cooper) will mystery.

To Jill’s surprise, Colin will be waiting with Champagne and two glasses. He’ll wonder what took Jill so long, so she’ll realize he’s been expecting her. Colin will ask if Devon Hamilton (Bryton James) gave his billions to Cane Ashby (Daniel Goddard), so Jill will confirm that he did. When Colin suggests that’s fantastic news, Jill will start ranting. She’ll fear this was Colin’s scam – just like she suspected.

The Young and the Restless spoilers say Jill will push Colin for the truth. Are the new will pages legit or not? That’s when Colin will tell a shocking story – one that leaves Jill even more confused than before. She came all that way for answers, but she’ll soon have more questions than ever.

It sounds like some great twists and turns are brewing in this storyline. We’ll give you updates as other Y&R details emerge. Stick with the CBS soap and don’t forget to check CDL often for the latest Young and the Restless spoilers, updates and news.