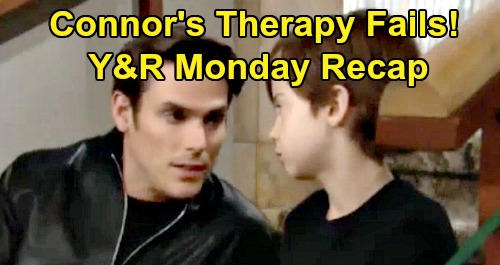 The Young and the Restless (Y&R) spoilers recap for Monday, November 18, teases that Kyle Abbott (Michael Mealor) will have another heated argument with Billy Abbott (Jason Thompson). They’ll bicker about a boutique in Milan, which Billy made a unilateral decision on. Kyle won’t think Ashley Abbott’s (Eileen Davidson) going to appreciate it either. He’ll feel like Billy’s on a power trip and just won’t understand where it’s coming from.

Billy won’t think Kyle’s truly earned his spot at Jabot, but Kyle will rant about this reckless rollercoaster. While Kyle leaves in a huff, Phillip “Chance” Chancellor IV (Donny Boaz) will make his way to Devon Hamilton’s (Bryton James) place. After Chance exchanges introductions with Elena Dawson (Brytni Sarpy), he’ll explain that he was undercover and couldn’t get in touch until now.

Devon will explode when he learns Chance wasn’t the one who hired Amanda Sinclair (Mishael Morgan). He’ll rage about making this life-altering decision based on a lie. Chance will be sorry for what happened and will admit he still has questions about those new will pages. Devon will feel confident he’s been scammed out of his billions.

After Elena takes off, Devon will summon Cane Ashby (Daniel Goddard) and give him an opportunity to confess before he hits him. Y&R spoilers say Cane will assure Devon he also has questions. However, he’ll be adamant that the will pages are real. Cane won’t appreciate Devon acting like he’s been lying about this.

When Jill Abbott (Jess Walton) calls, Cane will answer and learn she’s trying to track down Colin Atkinson (Tristan Rogers) in the Maldives. He’ll give Devon and Chance updates, so Chance will decide to catch a flight tomorrow afternoon and gets some answers. If Colin is indeed guilty, Devon will want him behind bars.

Other Young and the Restless spoilers say Chelsea Lawson (Melissa Claire Egan) will confide in Chloe Mitchell (Elizabeth Hendrickson). She’ll feel terrible about how her actions affected Nick Newman (Joshua Morrow), Connor Newman (Judah Mackey) and everyone else. As Nick listens in on their conversation, Chelsea will talk about Simon Black (Jeffrey Vincent Parise) potentially having dangerous friends who could strike next.

Afterward, Nick will speak with Chelsea alone. He’ll offer reassurance about protecting her and suggest that Connor needs to come home. The Young and the Restless spoilers say Chelsea won’t think that’s a good idea. She’ll want to avoid a custody battle on top of everything else. Nick still won’t trust Adam not to hurt them somehow. He’ll think Adam will always be Adam, but Chelsea will counter that Adam will always be Connor’s father, too.

At Adam’s penthouse, he’ll arrive with Connor after his visit to a child trauma therapist. Connor refused to open up, but Adam will promise he doesn’t have to go back. After Connor argues that his parents getting back together would make him feel better, Adam will note that he can call Chelsea anytime.

At Crimson Lights, Victoria Newman (Amelia Heinle) will grumble about Chelsea to Sharon Newman (Sharon Case). She’ll feel like it was a mistake for Chelsea to come back. It won’t be long until Billy finds Victoria and gripes about Kyle. Next, Adam will show up with Connor. They’ll convince Sharon to come hang out with them for a bit.

Victoria will be impressed that Billy was able to stay calm around Adam, but Billy will express concern about taking his frustration out on Kyle. He won’t think that’s a healthy way of dealing with things, so he’s going to see his therapist. Billy will assure Victoria that he doesn’t want a war to tear apart the Abbott family.

Back at Adam’s penthouse, Sharon will play with Connor and get him to talk. Once Connor heads up to his room, Sharon will have some guidance to pass along. She’ll think Adam needs to keep reassuring his son. Sharon will suggest it’d be good for Chelsea to offer support there as well. After Adam admits Connor wants his parents to reunite, Sharon will contend that it signifies stability for the kid.

Later, Adam will give Chelsea a call and arrange for her to come over for family time. At Billy’s therapy session, he’ll talk about how he might be projecting his anger. His therapist will point out that Billy made plenty of mistakes, even before Delia Abbott’s (Sophie Pollono). Billy will consider the idea that he may be self-sabotaging.

Back at Jabot, Billy will offer Kyle an apology for shutting him down. He’ll vow to listen to any ideas Kyle has and do a better job of handling their family’s legacy. As for Victoria, she’ll stop by Nick’s place and urge him to keep Chelsea at a distance for a while. Victoria won’t want Nick to give up on his campaign, but his mind will be made up. Later, Nick will give Michael Baldwin (Christian LeBlanc) a call and insist he needs to meet with Simon ASAP.

Over with Elena, she’ll run into Nate Hastings (Sean Dominic) on the Crimson Lights patio. They’ll talk about how Chance never hired Amanda, but Nate won’t think Amanda’s to blame. His defense of Amanda will annoy Elena. She’ll think Nate should cut Amanda loose as his attorney, but he’ll insist he’s counting on her to come through for him.

It sounds like another great episode’s on the way. We’ll keep you posted as other Y&R news comes in. Stay tuned to the CBS soap and don’t forget to check CDL often for the latest Young and the Restless spoilers, updates and news.