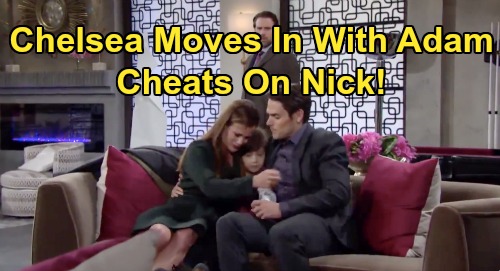 The Young and the Restless (Y&R) spoilers tease that Connor Newman’s (Judah Mackey) issues will get worse. He’s been through more than one kid should have to go through in a lifetime, but his parents will do their best to support him. Thanks to Connor’s involvement in the recent hostage situation, he’ll struggle to cope with the trauma. That should lead to more nightmares and some physical symptoms as well.

Y&R fans can expect some intense stomach pains for Connor. His nerves will probably just work him into a frenzy that’s difficult to recover from. Of course, it’s also possible Connor will be faking to push Chelsea Lawson (Melissa Claire Egan) and Adam Newman (Mark Grossman) together. We’ll cut the kid some slack in that case! After everything Connor’s endured, he’s entitled to do a little parent-trapping.

Connor also deserves to have the two people who love him most around him at all times. That’s why Chelsea will opt to move in with Adam. She’ll undoubtedly tell Nick Newman (Joshua Morrow) that the move is temporary, but he may view this as more manipulation.

Nick acted like Adam brainwashed Connor after his first night at the penthouse, so we have no doubt that he’ll blame his brother. Perhaps Nick will argue that Adam’s just using Connor’s crisis to his advantage. We’d like to think Chelsea would take umbrage at that. There’s nothing Adam loves more than his son, and it’s clear that he’s trying to make Connor the priority.

It’s Nick who isn’t putting Connor’s needs first. He’s letting his issues with Adam cloud his judgment, which could lead to serious problems with Chelsea. Like Adam, there’s nothing more important to Chelsea than their son. That’s the one thing that’s really brought Chelsea and Adam closer – and it’ll continue to do so.

Once Chelsea moves in, The Young and the Restless spoilers say temptation could strike. The warm fuzzies Chelsea’s feeling could turn into sizzling desire! “Chadam” fans would certainly like to see Adam and Chelsea reunite in the bedroom. They haven’t hooked up with Grossman in the role yet, so we’re all waiting to see those steamy sparks.