BY Heather Hughes on March 17, 2019 | Comments: one comment
Related : Soap Opera, Spoiler, Television, The Young and the Restless 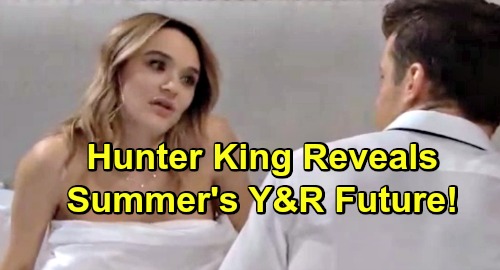 The Young and the Restless (Y&R) spoilers tease that Summer Newman (Hunter King) has some scary moments ahead of her. She just married Kyle Abbott (Michael Mealor), but her part of the deal will come with complications. Lola Rosales’ (Sasha Calle) surgery will go beautifully, but Summer will be left in dire condition. Dr. Nate Hastings (Brooks Darnell) will definitely worry about her recovery.

Kyle will fret as well as he awaits more news on Summer’s fate. Y&R fans may be wondering what that fate is exactly. Will Summer die or be sent offscreen for a lengthy coma? Hunter King herself set the record straight herself in a recent interview with Soap Opera Digest. Since King juggles her Y&R role with a role on CBS’ Life in Pieces, people may be asking if Summer’s sticking around.

It certainly seems that way based on King’s comments. She gushed about her costars on The Young and the Restless before insisting she’s more than willing to stay. “I just love being on this show,” King said. “As long as they want me, I’m thrilled to be there. We’re a close-knit group and I love being in Genoa City.”

Of course, that doesn’t mean there won’t be some story-driven absences. Lola was just in a month-long coma, so that kind of thing is required sometimes. It could be Summer’s turn to be comatose for a bit, but it sounds like she’ll remain on canvas and part of this hot plot.

Naturally, many Young and the Restless viewers haven’t been happy about Summer’s scheming lately. King admitted her own grandmother is often in disbelief over Summer’s appalling tactics. However, King is pleased to play someone with twisted tendencies. In fact, she feels like if you loathe Summer, she must be doing something right!

“If I’m that person that the audience loves to hate, that’s fine by me,” King said. “As long as they believe it, I’m good.” She added that getting a huge reaction like Summer tends to get is often the biggest compliment of all. If you love to hate Summer, you’re in luck. The Young and the Restless spoilers say Summer’s latest scheme will bring even more drama.

Are you excited to see what’s next for Kyle, Summer and Lola? We’ll give you updates as other Y&R details emerge. Stay tuned to the CBS soap and don’t forget to check CDL often for the latest Young and the Restless spoilers, updates, and news.