The Young and the Restless Spoilers: Nate Delivers Bad News, Summer’s in a Coma After Surgery Goes Wrong 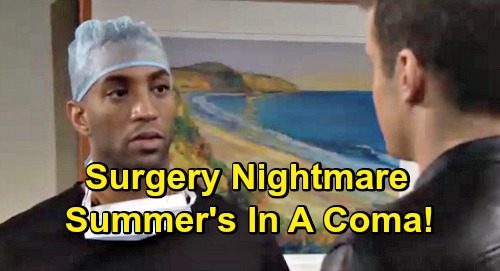 The Young and the Restless (Y&R) spoilers tease that Summer Newman (Hunter King) will suffer the consequences of a risky deal. She was over the moon at her wedding and even more thrilled when Kyle Abbott (Michael Mealor) made love to her. Summer’s dreams are coming true, but now it’s time to keep her promise. She got her perfect guy, so Lola Rosales (Sasha Calle) gets part of her liver.

Y&R viewers can expect growing fears for Summer on Monday’s new Y&R episode, March 18. She’s expressed concern about this surgery several times, but Kyle has offered plenty of reassurance. Nevertheless, a procedure like this can certainly be dangerous. Anything can go wrong on that operating table. In fact, the worst-case scenario is usually what soaps go for!

Dr. Nate Hastings (Brooks Darnell) will give Kyle updates after the transplant. The Young and the Restless spoilers say Kyle will be relieved to hear Lola’s OK. Things will go just fine on her end, so Lola will be recovering nicely back in her room.

Unfortunately, Nate will admit there were some complications for the donor. Kyle’s heart will sink when he learns Summer’s surgery didn’t go as well as Lola’s. He’ll worry that he pressured Summer into something she can’t come back from. Kyle’s been bending over backwards to save Lola’s life, but he’ll determine that saving it could cost Summer her own.

The Young and the Restless spoilers say Summer will likely be in a coma for a while. Will Kyle’s feelings for Summer grow while she fights to survive? Could almost losing Summer make Kyle realize he loves her, too? It’s entirely possible to have deep feelings for two people. Summer and Lola both appeal to Kyle in different ways, so he’s probably a bit torn already.

Of course, Summer has the advantage since she just tied the knot with Kyle and will suffer for her part of the deal. Even if his love for Summer isn’t as strong as his love for Lola, Kyle will feel sorry for his bride. That could go a long way toward strengthening the bond between them. Kyle will feel even more obligated to keep his end of the bargain, which means staying married to Summer for a year.

What do you think about Summer’s surgery complications? Will the coma she falls into will pull Kyle closer? Will Summer feel the shift when she wakes up? We’ll keep you posted as other Y&R news comes in. Stick with the CBS soap and don’t forget to check CDL often for the latest Young and the Restless spoilers, updates and news.