BY Marcy Cohen on March 16, 2019 | Comments: one comment
Related : Soap Opera, Spoiler, Television, The Young and the Restless 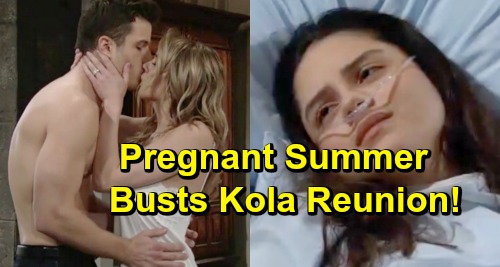 The Young and the Restless (Y&R) spoilers tease that Lola Rosales (Sasha Calle) will have to face the harsh truth. Unfortunately, it seems it won’t be the whole truth – at least not yet. Lola believes she’s going to survive and get the reunion she’s dreaming of with Kyle Abbott (Michael Mealor). This couple’s faced plenty of problems, but Lola’s ready to move on.

Sadly, that won’t be possible thanks to Kyle and Summer Newman’s (Hunter King) marriage. Kyle was willing to do whatever he had to do if it meant locking in that liver. Of course, there’s clearly some attraction here. Kyle and Summer have a history together, so there’s a connection, too.

All of that will be running through Lola’s mind when Kyle drops this marriage bomb. She’ll feel like Kyle’s chosen the woman he wants, but he’ll assure her that’s not the case. Kyle will contend that he only tied the knot with Summer to secure Lola’s liver transplant. He’ll insist it’s a sham marriage and nothing more.

Is that really true though? Kyle’s the one who offered to marry Summer in the first place. He also told her sex was off the table, but that plan didn’t last long! Since Kyle and Summer made love on Friday’s Y&R episode, March 15, that says a lot about what’s going on between them. If Kyle loved Lola as much as he says he does, would he hop in bed with Summer so fast?

Of course, there’s a difference between love and lust. You could argue that Kyle’s just been craving sex since Lola’s a virgin. However, that’s not the way the steamy Young and the Restless scene plays out. Kyle seems to genuinely want that level of intimacy. He wants to be close to Summer in that moment, so there may be more between them than he’s willing to admit.

Kyle wouldn’t have married Summer without Lola’s need for part of her liver, but they aren’t a bad match. He’ll want to honor his commitment, especially since Summer’s putting her life on the line to give Lola this wonderful gift. Kyle will act like that’s the only reason he’s sticking with Summer, but he may neglect to mention their sex session to Lola. Still, you can bet she’ll find out sooner or later – like when Summer tells her or winds up pregnant!

Whether Kyle eventually comes clean or Summer takes the opportunity to rub it in, Lola is sure to be devastated. She’s going to feel like she was right all along. Lola will inevitably think she wasn’t enough for Kyle without the option of sex. If things quickly fall apart with Summer, the fact she’s pregnant, or even that he slept with her, could hinder Kyle’s Y&R reunion with Lola.