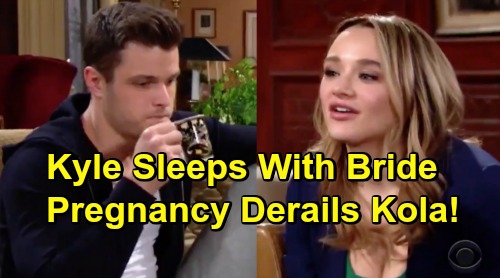 The Young and the Restless (Y&R) spoilers tease that Kyle Abbott (Michael Mealor) will move forward with this sham marriage to Summer Newman (Hunter King). Some characters will remain confused and even outraged when they tie the knot. Others will have the liver donor drama all figured out.

However, Summer has made her demands and has no intention of budging. If Kyle wants this life-saving surgery for Lola Rosales (Sasha Calle), he’ll have to suck it up and marry Summer. Kyle will nearly back out, which shows he’s not taking this agreement lightly. He’ll hate the idea of being forced into this, but getting a liver donation for Lola is just too important.

Of course, there’s always a chance Summer’s fears about the surgery will come true. She’s been nervous about going under the knife, so things may get dicey after complications arise. It makes sense that Y&R might use that as a way of guilt-tripping Kyle into sticking to the plan. Kyle would have a reason not to seek an annulment and pull the rug out from under Summer.

In fact, Kyle could grow quite close to Summer as time goes on. It hasn’t been that long since he desperately wanted to be with her. Kyle fell hard for Lola, but he fell just as hard for Summer once upon a time. Once Summer has fully recovered, Kyle may even decide husbandly duties are no longer off the table!

Since Lola is virgin, sex became a huge topic in their romance. Kyle insisted he wanted to be with Lola no matter what, but he also admitted they were missing out on a deeper part of an adult relationship. Summer has already been trying to use that to her advantage, so there’s no reason to think she’ll stop once they’re married. If anything, Summer will boost her efforts to hook up with Kyle.

Kyle’s long overdue for some steaminess in the bedroom, so he may finally cave in. He’ll be dealing with a mixture of frustration, despair and even rage in the coming weeks. It could all set up some hot, angry sex with Summer. Later, Kyle could decide this whole marriage was a mistake. He could renege on their deal after all, but would that hookup come back to haunt him?

The Young and the Restless spoilers say some surprises are looming in this storyline. It’d be great if Summer ended up pregnant. Last month, Phyllis Summers (Gina Tognoni) dropped a hint about Summer being a mom one day. Summer laughed it off and suggested Phyllis shouldn’t wish that on her, but she may change her tune if it gives her a shot at keeping Kyle!