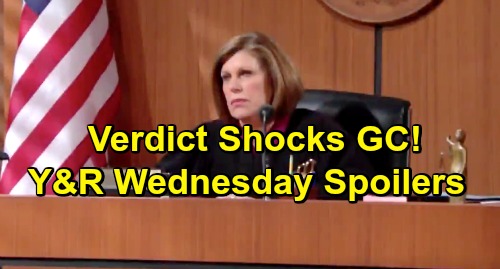 The Young and the Restless (Y&R) spoilers for Wednesday, March 13, tease that Nikki Newman (Melody Thomas Scott), Victoria Newman (Amelia Heinle) and Sharon Newman (Sharon Case) will learn their fates. They’ll return to the courtroom and await the verdict that will affect their future. There were plenty of twists along the way, so this jury had some juicy details to go over during deliberations.

First, we have the star witness who turned out to be the ringleader. Phyllis Summers (Gina Tognoni) ratted the others out when she was the one who convinced them to cover up J.T. Hellstrom’s (Thad Luckinbill) death in the first place. However, she was merely backing up Sharon’s recanted confession, which came after the lead detective on this case, Rey Rosales (Jordi Vilasuso), declared his love for her.

There was also video proof of the women moving the body, which led to Tessa Porter’s (Cait Fairbanks) blackmail admission. That brought two more surprises for the jury: the revelation that Tessa was kidnapped and the fact that she’s dating Mariah Copeland (Camryn Grimes), the daughter of one of the defendants. Any damage control Tessa tried to do for Mama Sharon probably won’t help because of that.

Michael Baldwin (Christian LeBlanc) eventually put domestic violence on trial and let Victoria offer her side of the story. That brought the footage of J.T.’s abuse into play, but it also meant once again telling the jury a completely different story. Victoria was forced to admit that she lied to the police and Michael many times.

J.T.’s body is missing, but the cover-up and blackmail payment likely served as evidence of guilt for this jury. The Young and the Restless spoilers say three convictions are coming up. It seems Victoria’s compelling testimony couldn’t overcome Christine Williams (Lauralee Bell) earlier blows to the defense.

Y&R fans can expect sentencing for Victoria, Nikki and Sharon soon, so that means they’re going down. It’s worth mentioning that the verdict will be a bit of a bombshell. The women are bracing for the worst, so a guilty verdict alone shouldn’t be shocking. Something else will have to throw them for a loop in that courtroom.

Whatever it is will set up another major story shocker, which likely involves Victor Newman’s (Eric Braeden) hunt for J.T. Regardless, the ladies need to be locked up for at least a little while. The whole point of J.T. potentially coming back from the dead is to clear them.

Next, let’s talk about Kerry Johnson (Alice Hunter). The Young and the Restless spoilers say she’ll continue to scheme on Wednesday’s new Y&R episode, March 13. Jack Abbott (Peter Bergman) and Billy Abbott (Jason Thompson) will have faith in this double agent, but they don’t realize she has a separate agenda. Kerry’s got a mysterious boss who’s pulling the strings.

Phyllis will open up to Kerry about her mission to take down My Beauty, Ashley Abbott’s (Eileen Davidson) new company. It won’t be long until Kerry shares the scoop with her boss and helps her gain a serious advantage. Phyllis won’t realize she’s falling into a trap – and neither will a smitten Jack.

It sounds like Ashley may behind Kerry’s sneaky plan, so Y&R viewers won’t want to miss the curveballs ahead. We’ll give you updates as other news comes in. Stay tuned to the CBS soap and don’t forget to check CDL often for the latest Young and the Restless spoilers, updates, and news.