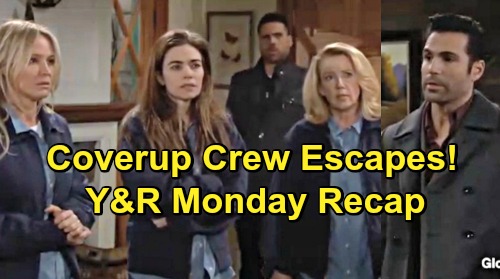 The Young and the Restless (Y&R) spoilers for Monday, March 18, tease that Summer Newman (Hunter King) will awaken to find Kyle Abbott (Michael Mealor) dressed and ready to leave. In their suite, Summer will suggest she was hoping for a romantic morning. She’ll think making love to Kyle last night felt real and right. Kyle will make it clear that he’s going to stand by the promise he made.

Meanwhile, Mia Rosales (Noemi Gonzalez) will look pensive as she mulls over her dilemma. She’ll call Arturo Rosales (Jason Canela) over to give him a harsh ultimatum. Y&R spoilers say there’ll be a major story adjustment. We’ll see a flashback of the night Arturo fixed the furnace in Mia and Rey Rosales’ (Jordi Vilasuso) apartment. It turns out they had some steamy sex!

Mia will order Arturo to help her fix things with Rey. She’ll warn that if he doesn’t, she’ll tell Abby Newman (Melissa Ordway) about Arturo’s betrayal. Across town, Nick Newman (Joshua Morrow) and Billy Abbott (Jason Thompson) will push Rey to assist them. They’ll tell him about ranch intruder, who sang a song to Katie Abbott (Sienna Mercuri) that was written by J.T. Hellstrom (Thad Luckinbill).

Rey will decide he’s all in on Billy and Nick’s plan. He’ll admit he didn’t expect the sentencing to be so harsh, so he’ll want to fix this for Sharon Newman’s (Sharon Case) sake. At the police station, Sharon will join Victoria Newman (Amelia Heinle) and Nikki Newman (Melody Thomas Scott). They’ll be in handcuffs and prison garb as they head to the transport van.

After the van stops in the middle of their trip, the ladies will wonder what’s up. That’s when Nick will appear and offer reassurance. The Young and the Restless spoilers say Nikki, Victoria and Sharon will be hidden at the Abbott cabin. Rey will head off to support Lola Rosales (Sasha Calle), but Nick and Billy will be there to calm the escaped convicts. They’ll insist it’s time to catch J.T. in their trap.

At the hospital, Summer will go incognito in a hat and sunglasses. She’ll tell Dr. Nate Hastings (Brooks Darnell) she doesn’t want to hear any surgery details. Summer will just be ready to get this over with. She’ll also gripe about Kyle acting like this marriage is jury duty or some other unpleasant obligation.

Summer will think she should’ve made Kyle sign a contract, but he’ll stand by his verbal commitment. Kyle will let Summer know he’ll be waiting when the operation’s over. A frightened Summer will tell Kyle she loves him before she’s wheeled away.

In Lola’s room, she’ll question Arturo about Kyle. He’ll avoid the topic as best as he can, so Lola will eventually talk about the donor. She’ll wish she could offer her gratitude to the person who’s saving her life. Lola will think maybe Arturo could try to find out who’s making this sacrifice for her.