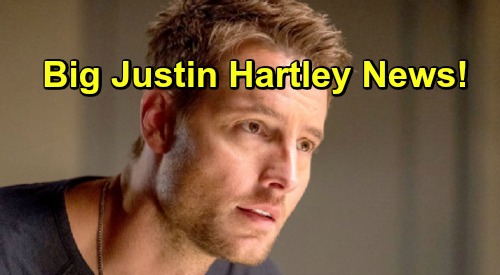 The Young and the Restless (Y&R) spoilers reveal that one CBS soap star is set to hit the big screen in an exciting new film. Justin Hartley left Y&R back in 2016, but viewers will always have a soft spot for his time as Adam Newman. Hartley faced a tough task when he took over after Michael Muhney’s firing, but he managed to make the role his own and earned plenty of fans in the process.

Of course, Hartley now portrays Kevin Pearson on NBC’s hit drama, This Is Us. He’s also filming a new movie from Universal that’s set to be released October 18. According to Deadline, Hartley will star The Hunt along with Emma Roberts and Glenn Howerton. Damon Lindelof and Nick Cuse are the writers behind this political thriller, which will be directed by Craig Zobel.

The plot details are being kept hush-hush for now, but word has it the flick “explores escalating aggressiveness between the political right and left in America.” It sounds like a gripping role for Hartley to tackle, so we can’t wait to watch him run with it. If you can’t wait to get your next Hartley fix, you can also catch him in a fun comedy called Little. That movie will hit theaters starting April 12.

Hartley continues to find success outside of the soap world, but he hasn’t forgotten his roots. In a recent issue of Soap Opera Digest, Hartley reflected on playing Adam and insisted it was a great character. He expressed nothing but support for Y&R’s decision to recast the part.

The Young and the Restless officially announced the search for a new Adam Newman not too long ago, so everyone’s waiting to find out which lucky actor will lock it down. The latest Y&R buzz hints that a recast has already been found, but the show hasn’t revealed who it might be just yet. You can bet it’ll be huge news when they finally go public with a name and first airdate.