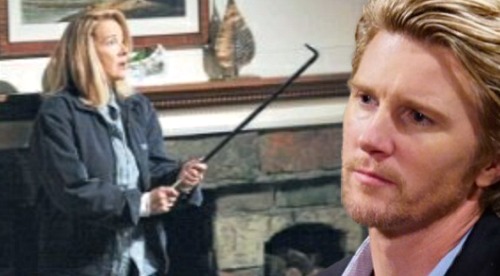 The Young and the Restless (Y&R) spoilers tease that some wild moments are coming up for the cover-up crew. They’ll once again find themselves facing a vicious J.T. Hellstrom (Thad Luckinbill)! Billy Abbott (Jason Thompson) and Nick Newman (Joshua Morrow) will think they’re doing the right thing when they help the ladies escape. They’ll hide them at the Abbott cabin to provide protection.

Unfortunately, Nick and Billy will end up putting the women in grave danger. It would’ve been better to just let them head to prison while they sorted the J.T. mess out. Of course, that wouldn’t have given Y&R fans the drama of a quick getaway and a shocking showdown! Sometimes logic has to go out the window if we want some hot episodes.

The Young and the Restless spoilers say J.T. won’t fall for Billy and Nick’s trap. Instead of showing up at a Dark Horse warehouse like they want, J.T. will make a vengeful journey to the cabin. It sounds like he may want to finish off Nikki Newman (Melody Thomas Scott), Victoria Newman (Amelia Heinle) and Sharon Newman (Sharon Case) for what they did to him.

Once J.T. arrives, that’s when things will really get crazy. Nikki had the element of surprise on her side last time, but J.T. will be ready for this round. On the bright side, it’ll be three against one. Unlike what happened that fateful girls’ night, Victoria and Sharon will be able to help Nikki. They’ll grab any weapons they can find and fight back in a big way.

Nikki will snatch up the fireplace poker, which is an excellent choice since she clearly knows how to use it. Word has it Sharon will brandish a bookend. That’s also fitting since she once whacked Mariah Copeland (Camryn Grimes) with one when she was off her meds. Y&R buzz hints that Victoria may get her hands on a knife or some other sharp object. Whatever the case, the women will be armed!

The Young and the Restless spoilers say J.T. will be injured after the women gain the upper hand. It appears he’ll be hospitalized and arrested, but we know Victor Newman (Eric Braeden) will fit in all this somehow. Will he show up at the cabin to help handle J.T. or will his part come later? Either way, Victor will make sure the ladies are cleared and back home with their families before long.