BY Sean O'Brien on March 17, 2019 | Comments: one comment
Related : Soap Opera, Spoiler, Television, The Young and the Restless 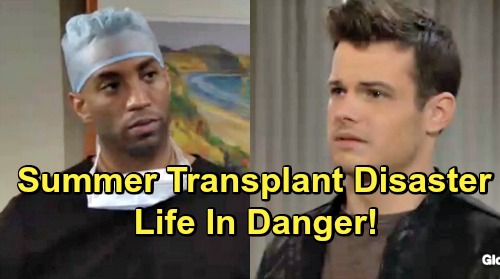 The Young and the Restless spoilers tease that part of the deal Summer (Hunter King) negotiated with Kyle (Michael Mealor) is at risk. While the wedding between these two companions happened, followed by post-nuptial consummation, Summer’s plan to keep her liver donation a secret hasn’t been well thought out.

In her mind, Summer doesn’t want anyone, other than Kyle, to know that she’s donating half her live to Lola (Sasha Calle). Let’s start with Miss Rosales to understand Summer’s strategy.

If Lola learned that Summer is the donor, so too would her brothers. Arturo (Jason Canela) is Abby’s (Melissa Ordway) fiance and current cousinly (an invented adjective that works) rival. The intended Mrs. Rosales would let everyone know what Summer did in order to force the end of Skyle’s marriage.

Summer does not want either of her parents to gain knowledge of the scheme she’s concocting. Phyllis (Gina Tognoni) and Nick (Joshua Morrow) would be furious that their daughter used a portion of her body to force Kyle into marrying her. Newman and Summers family angst wouldn’t be productive.

Victor (Eric Braeden) always defends his own. But he would not be pleased with Summer if she is exposed as having bartered a part of herself in order to marry, of all things, Jack’s (Peter Bergman) son.

How is Summer going to conceal major surgery now that her grandfather expects her to return to work the afternoon following her marriage? That’s what Victor is expecting, as Genoa City’s Scrooge felt that allowing the wedding day and the morning after off was generous.

Regarding the last question asked, Summer can’t. Such planned surgery would be followed by at least a number of days recovery and then many weeks of rest.

Summer may plan an attempt to skirt Nate’s (Brooks Darnell) surely to be advised hospital stay schedule, or return to work long before she should. If so, she’ll be putting her own health in jeopardy.

Along with the above, Summer may not have realized that any connected plan she has to become the mother of Kyle’s first child could be hampered by the operation she’s about to undergo. It’s easy to assume that Summer wants to tie herself to Mealor’s embattled character for life, which parenthood would seal.

Despite whatever planning has gone into this, The Young and the Restless spoilers tease that Summer’s follow plan help her to hide her liver donation surgery from all loved ones will blow up. On next week’s new Y&R episodes, March 18-22, Nate will inform an anxious Kyle that Summer’s surgery didn’t go well – this means a coma or at least a serious health crisis is on the way for the new Mrs. Abbott.

Summer’s health crisis means that everyone will learn everything about what really happened – how Kyle married her in order to save Lola with the liver donation. The Newmans, Abbotts and others in Geno City will be out for Kyle’s blood when they learn this horrifying news. At that point Y&R fans can expect all hell to break loose in Genoa City! CDL is a leading source for everything linked to The Young and the Restless. Check back regularly for Y&R spoilers and news!