The Young and the Restless Spoilers: Adam Wins Sharon’s Heart, But Misdeeds Come Back to Haunt Him – Shadam Explodes Over Darkness 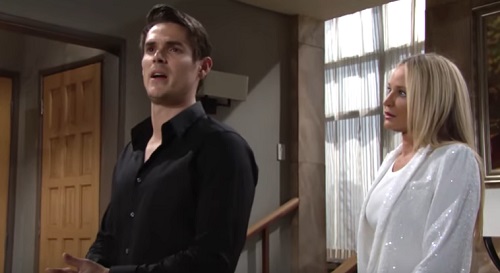 The Young and the Restless (Y&R) spoilers tease that Sharon Newman (Sharon Case) will find herself drawn to Adam Newman (Mark Grossman) once again. There always seems to be some reason for Sharon to gravitate toward her former flame. In fact, there are several reasons at the moment – including Victor Newman’s (Eric Braeden) shocking “death” and Nick Newman’s (Joshua Morrow) insistence that his brother’s responsible.

However, the main reason Sharon will land back at Adam’s place is Victoria Newman (Amelia Heinle). Thanks to the evidence against Victoria and her shocking arrest, Nick will once again be eager to point the finger at Adam. Of course, he’ll be spot-on about Adam framing Victoria, but Sharon won’t want to believe it. She wants to see the best in her ex and that often blinds her to Adam’s worst qualities.

On the bright side, Sharon also seems to be the only person who can draw out Adam’s good side. It’s hard to do, but she’ll hope she can pull it off during the week of September 23-27. The Young and the Restless spoilers say Sharon will urge Adam to help his sister. He’ll wonder what the benefit would be, so Sharon will suggest she’d be the reward. Sharon will imply that Adam has a shot with her if he does this.

How will Adam handle this difficult dilemma? He’s the one behind Victoria’s setup, but he desperately wants a chance with Sharon. Will Adam find some way to get Victoria off the hook without exposing his plan? Adam and Sharon may be poised to become an item again if he can make this happen. Unfortunately, Adam would be setting himself up for more heartbreak – at least initially.

That’s because sooner or later, the whole ugly truth is going to come out. Sharon will inevitably find out that Adam swapped Victor’s pills to worsen his side effects. She’ll also discover Adam framed Victoria for Victor’s murder, so none of this will make him appealing in her eyes.

Even so, Nick won’t come out smelling like a bed of roses either. Sharon may think this fake death plot was cruel, especially since it’ll take an emotional toll on Faith Newman (Alyvia Alyn Lind). She may even think it was cruel to do this to Adam. It’s not like Adam planned on his dad kicking the bucket; he just mad a horrible call and took way too big of a risk.

Nick is clearly in on this scheme with Nikki Newman (Melody Thomas Scott) and Nate Hastings (Sean Dominic), so that could make things complicated. Will Sharon and Adam still have a shot together? It may take some time for Sharon to work through all this, but never say never. Y&R Head Writer and Co-Executive Producer Josh Griffith seems to like “Shadam.”

Now that daytime exec Anjelica McDaniel is out and her position has been eliminated, that could give Griffith a bit more leeway on stories. He could have more freedom to do a Sharon and Adam reunion if he’s been held back. Regardless, Sharon will have a lot to process in the coming weeks.