The Young and the Restless Spoilers: Adam’s Memory Problems – Recalls Sharon as Love of His Life – Rey Faces Deadly Rival 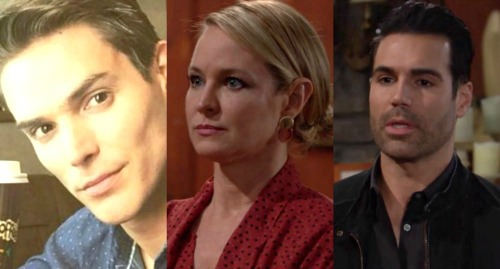 The Young and the Restless (Y&R) spoilers tease that Adam Newman’s (Mark Grossman) returning storyline will be quite a shock to Sharon Newman (Sharon Case). Adam will remember her as the love of his life, stunning the whole Newman family.

Over the next few weeks, Rey Rosales (Jordi Vilasuso) will discover Victor Newman’s (Eric Braeden) secret – Adam is alive. As CDL reported, Nikki Newman (Melody Thomas Scott) hired Rey to look into what Victor has been doing in Las Vegas. What he finds stuns Sharon and leaves the Newman family rocked.

Rey will report to Sharon that Victor has been visiting and overseeing the care of his son. At first, Sharon figured that Victor could have a son no one knew about. If you think about it, that is a possibility. However, Rey will find out that the son he is visiting is named Adam. This news will stun Sharon and leave her speechless.

After the initial shock wears off, Rey and Sharon learn that Adam has memory loss and he can’t remember the past five years of his life. The one thing he remembers very clearly is the love of his life, which in his mind is Sharon.

Y&R spoilers say that Sharon isn’t sure why he remembers her as his great love as they haven’t been together for a long time. Sharon would assume he’d consider Chelsea Newman (Melissa Claire Egan) as his great love. She knew they were on good terms and respect each other, but a great love, she isn’t sure about that.

Sharon decides to see Adam when he makes his way to Genoa City. It looks like Y&R may be reviving Shadam as the May Sweeps spoilers say that something complicates Sharon and Rey’s relationship – pointing out someone from Sharon’s past causes drama.

So, that is not Mia Rosales (Noemi Gonzalez) as many viewers figured a few weeks ago.

Another clue from the Y&R spoilers is Nick Newman’s (Joshua Morrow) worst nightmare comes true. He and Adam are not very close and he will be devastated to hear that he is calling Sharon the love of his life.

Nick will be even more devastated when Adam demands his son Christian back! It will definitely pit the brothers against each other, especially after Nick hears that Victor referred to Adam as “the apple of his eye.”

Are you excited about Adam’s return? Do you want to see Shadam back together? Come back to CDL for more The Young and the Restless (Y&R) spoilers, news, and updates!