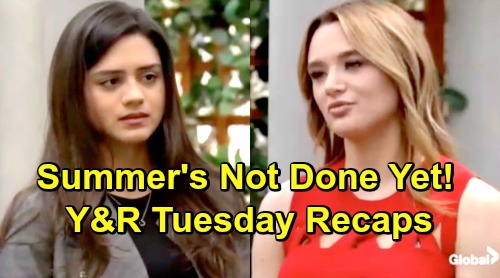 The Young and the Restless (Y&R) spoilers for Tuesday, April 30, tease that Rey Rosales (Jordi Vilasuso) and Sharon Newman (Sharon Case) will discuss an important case. After Nikki Newman (Melody Thomas Scott) calls and once again pushes for Rey’s help, he’ll note that he could use the paycheck. Sharon will be on the same page about this potentially working out well.

Since Nikki’s determined to learn Victor Newman’s (Eric Braeden) exact whereabouts in Vegas along with his hidden agenda, she’ll trust Rey to secure the info she needs. While Rey takes the case, Summer Abbott (Hunter King) will spar with Kyle Abbott (Michael Mealor) over the end of their marriage. He’ll wonder if she’s thought about where to live, so she’ll complain about him tossing her aside.

Later, Jack Abbott (Peter Bergman) will do his best to handle the tricky situation. He’ll remind Summer that things are complicated and add that maybe she should stick with Newman Enterprises. Jack won’t feel like the timing’s right for Summer to join Jabot anymore.

Over with Phyllis Summers (Gina Tognoni), she’ll lock in her deal with Billy Abbott (Jason Thompson). He’ll agree to fund her new business venture, but he’ll warn that this is the end of the road. Billy won’t want Phyllis guilt-tripping him over his Summer hookup anymore.

Next, Victoria Newman (Amelia Heinle) will mention Billy’s proposal to Nikki. When Nikki asks if she loves him, Victoria will admit that she does. The Young and the Restless spoilers say Nikki will voice her support. She won’t see why Victoria should let anything hold her back from a life of happiness.

Back with Jack, he’ll talk about Neil Winters’ (Kristoff St. John) death with Lauren Baldwin (Tracey E. Bregman). They’ll decide to have another meeting about Jabot and Fenmore’s later. In Phyllis’ suite, she’ll get updates on Summer and Kyle’s breakup. Phyllis will feel like Summer should find someone who truly values her, but Summer will disagree. She’ll feel like now is the time to fight for love.

When Summer admits she’s bummed about not working at Jabot, Phyllis will suggest she should tell Jack she wants to accept the offer anyway. Summer will do just that later, but Jack will be wary. Nevertheless, he’ll promise to mull it over since Summer’s got the right skills for the position.

Other Y&R spoilers state that Rey will reconvene with Sharon and fill her in on the Vegas trip. Sharon will insist on coming along, but Rey will wonder if that’s such a good idea. After Sharon points out she knows how Victor rolls, Rey will cave in and look forward to having a sidekick.

At the coffeehouse, a puzzled Lauren will grill Phyllis about Billy’s funding. She won’t understand, but Phyllis will push past that topic and focus on the venture itself. Phyllis will admit she’s starting an accessories business, which will bring more questions from Lauren. However, Phyllis won’t say much about her plans and what they entail.

Soon after, Phyllis will bump into Mia and comment on her knock-off sunglasses. She’ll think Mia might be able to help her out with her new venture. Once Phyllis is gone, Mia will spot Sharon and mention her new job. She’ll claim she’d like to be on good terms, but Sharon will think this is all a ploy to keep herself out of prison.

Mia will be shocked that Rey told Sharon the truth about Lola Rosales’ (Sasha Calle) attack. Sharon will insist they don’t keep secrets from each other. She’ll make it clear that she holds great power now, so Mia shouldn’t try to interfere.

Across town, Billy will reassure Victoria about Phyllis’ funding. He’ll promise it’s a parting gift and nothing more, so Victoria will choose to trust him on this. Back with Nikki, she’ll read an online article about an FBI investigation. There’s a case surrounding someone they call the “Queen of Las Vegas,” so Nikki will worry about the mess Victor might be in.

At Society, Kyle will thrill Lola with the Summer split news. He’ll note that there’s nothing standing in their way now, so they’ll make plans for a celebration later. Kyle will hint that he’s got a surprise in store. He’ll go up on the roof to set up a tropical paradise, complete with music and a little taste of the beach.

In the meantime, Lola will have an awkward encounter with Summer at Chancellor Park. She’ll be sorry for how it all went down, but she’ll assure Summer’s she’s grateful for her sacrifice. Kyle and Lola will always owe Summer for her life-saving gift. If Summer could go back knowing what she knows now, she won’t be sure she’d do it all over again.