The Young and the Restless Spoilers: Ashley Returns to Genoa City with a Bombshell – Abbott Family Receives Shocking News 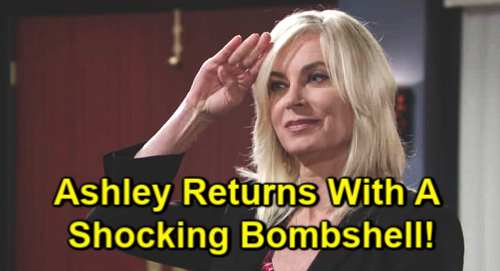 The Young and the Restless (Y&R) spoilers tease that a familiar face is headed back to Genoa City. During the week of November 11-15, Ashley Abbott (Eileen Davidson) will return home and catch up with her family. There’ll certainly be a lot to catch up on since they’ve gained a family member since Ash was last in town.

In the episode airing October 30, Jack Abbott (Peter Bergman) mentions that Ashley encouraged him to reach out to Theo Vanderway (Tyler Johnson). She’s apparently on board with learning as much as they can about Theo and his deceased dad, Eric Vanderway (Jon Briddell).

Kyle Abbott (Michael Mealor) obviously isn’t happy about any of this, and things are only going to get worse thanks to DNA confirmation. Ashley may be walking into a full-blown war-zone after she lands in GC. Y&R spoilers say Ash may have to play peacemaker if Jack and Kyle’s battle gets out of hand.

Of course, this battle could easily spill over into the workplace, where Billy Abbott’s (Jason Thompson) already been eager to watch Kyle fall on his face. Kyle won’t be at the top of his game due to this cousin revelation. Mistakes could be made and tempers should be short. Ashley may wade into the middle of the Jabot drama and perhaps even present an alternative.

There’s no word yet on how long Ashley will stick around, but it’d be nice if this visit lasted for a while. The Young and the Restless spoilers say Ashley will deliver some shocking news upon her arrival. Will she decide to stay in town for a bit and offer to take the reins at Jabot? That’d be an interesting curveball for Billy and Kyle, who have enough on their plates trying to deal with each other and their respective problems.

Billy’s got inner demons to keep at bay, so he really doesn’t need the added stress of this job. Kyle has fresh ideas, but he doesn’t have as much experience and he’s hung up on this Theo issue. His life would be so much easier if he wouldn’t let Theo get under his skin. Then again, Kyle can’t let his guard down either. He’s stressed to the max, so maybe handing the company over to Ashley would be for the best.

There’s no guarantee Ashley will throw her hat in the CEO ring, but it’s a possibility to consider. However, Ashley’s news could involve something related to Dina Mergeron (Marla Adams) and her history. Maybe she’ll uncover something else that pertains to Stuart Brooks and the adoption. Ashley could also have some business bombshell to pass along. You just never know what Ash has in store when she pops up!

Ashley will undoubtedly meet up with Abby Newman (Melissa Ordway) at some point to discuss her breakup with Nate Hastings (Sean Dominic). She might give Abby a pep talk and give her some good advice about the future.