BY Heather Hughes on October 30, 2019 | Comments: one comment
Related : Soap Opera, Spoiler, Television, The Young and the Restless 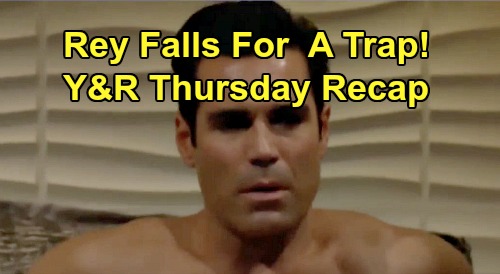 The Young and the Restless (Y&R) spoilers recap for Thursday, October 31, teases that things are about to get spooky in Genoa City. Before some nightmares begin, let’s set the stage. Abby Newman (Melissa Ordway) will decide to just crash in a suite at the Grand Phoenix, where Rey Rosales (Jordi Vilasuso) and Sharon Newman (Sharon) will get a suite of their own. They’ll end up making love before Rey’s dream kicks off.

After giving Sharon jewelry earlier in the evening, Rey will have it on his mind as he drifts off to sleep. He’ll plan to steal jewels from the Newman ranch while Nikki Newman (Melody Thomas Scott) and Victor Newman (Eric Braeden) are attending a gala. Dream Sharon will vow to meet Rey at the spot they’ve selected, but she won’t show.

Instead, Adam Newman (Mark Grossman) will let Rey know he’s been duped. He’ll explain that he’s with Sharon now and Rey’s going to be their fall guy. Sirens will let Rey know he’s doomed. The Young and the Restless spoilers say Rey will wake up startled and wander over to the window. It sounds like he’ll have to process all the Halloween horror!

Of course, Nick Newman’s (Joshua Morrow) dream will be far worse. He’ll doze off during a scary movie and imagine that Victor is dead – but not THAT Victor. More on that in a minute… Y&R spoilers say Nick will let go of a knife and insist he’s not to blame. He’ll be confused when Phyllis Summers (Michelle Stafford) shows up to mourn. Nick won’t get why Phyllis would be upset over this loss, but Nikki will confirm it’s “Victor, Jr.” who’s passed on.

After Nick opens the casket to reveal Adam, he’ll be perplexed as everyone praises his brother. Chelsea will indicate that Connor Newman (Judah Mackey) will go by the name “Victor” from now on. Later, Rey will show up to place Nick under arrest. Sharon will argue that Nick’s guilty since she saw the whole thing. Nick will protest that Adam’s gone and has faked his death again. He’ll call for Chelsea, who will arrive to wake Nick up and put an end to his misery.

In Phyllis’ suite, she’ll insist she doesn’t need Adam’s millions before she dreams of a Newman Enterprises takeover. This nightmare will start out similar to The Devil Wears Prada, complete with a freaked-out Sharon as Phyllis’ assistant. Sharon will rush around trying to make sure everything’s perfect for her demanding boss.

Phyllis will grin in her sleep as a press conference gets underway. The Young and the Restless spoilers say Phyllis will enjoy the power trip, which will include firing Kyle Abbott (Michael Mealor) and rejecting Jack Abbott’s (Peter Bergman) pitch. Things will take an eerie turn later when Phyllis tries to talk to the Newmans. She’ll be invisible as the family discusses Phyllis’ downfall – she’s now poor and homeless.

Nick will score a laugh by suggesting that they help Phyllis through New Hope. Phyllis will manage to awaken from her slumber and get some relief. Just to be on the safe side, Phyllis will head out of her suite to make sure people can still see her!

Other Young and the Restless spoilers say Abby will imagine she’s the center of attention. Kyle, Theo Vanderway (Tyler Johnson), Lola Abbott (Sasha Calle) and Mariah Copeland (Camryn Grimes) will all be on hand to crack jokes at Society. They’ll make fun of Abby as a laugh track plays, but Abby will let out a scream and awaken to realize it was all a dream.

Over with Kyle, he’ll have a nightmare about Theo trashing the Abbott mansion. Theo will make himself right at home by breaking out the tequila and being obnoxious during the family gathering. Abby will think this bash is great, but she won’t have a high opinion of Lola in this dream. She’ll rant about Kyle sticking with the food truck girl before Summer Newman’s (Hunter King) name comes up.

Lola will end up lashing out over Summer and insisting that Kyle needs to get over her. Mariah will be on hand to argue that if Kyle can’t appreciate Lola, he doesn’t deserve her. Jack will get fed up with party boy Theo and try to throw him out, but that plan won’t work. Theo will declare that he’s had Jack declared incompetent and has appointed himself as Jack’s guardian. He’ll think Jack should live with Dina Mergeron (Marla Adams).

The Young and the Restless spoilers say Theo will turn his attention back to Kyle, who’ll be horrified to learn the party will go on forever. Once Kyle wakes up, he’ll get some comfort from Lola. It sounds like an action-packed episode’s on the way. We’ll give you updates as other Y&R news comes in. Stay tuned to the CBS soap and don’t forget to check CDL often for the latest Young and the Restless spoilers, updates and news.