BY Marcy Cohen on May 1, 2019 | Comments: 2 comments
Related : Soap Opera, Spoiler, Television, The Young and the Restless 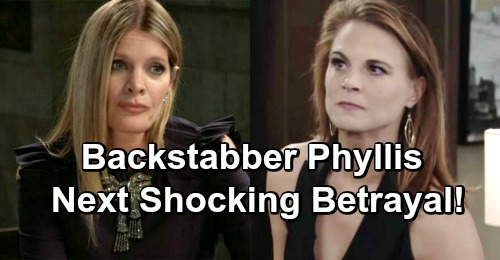 The Young and the Restless (Y&R) spoilers tease that Phyllis Summers (Gina Tognoni) will keep moving forward. She’s determined to rebuild her life after a series of tough blows – most of which she brought upon herself. It’s clear that Phyllis a lot to come back from.

Phyllis was the ringleader of the cover-up crew, but she chose to betray the other members in the end. Her immunity deal led to her split from Nick Newman (Joshua Morrow), so Phyllis definitely paid the price. Of course, “Kerry Johnson” aka Dominique Caroll (Alice Hunter) duped Phyllis and cost her the CEO job at Jabot. Phyllis’ life is a wreck both personally and professionally, so she’s seeking a fresh start.

However, a fresh start doesn’t mean Phyllis will turn from her wicked ways. She’s still the same Phyllis, which she proved by essentially blackmailing Billy Abbott (Jason Thompson). Now that Phyllis has scored the funding for her accessories business, she’ll work hard to make it a huge success. Newly hired Mia Rosales (Noemi Gonzalez) may not be of much help since her exit is rapidly approaching.

Nevertheless, Phyllis will stay focused and put all the effort she can into this venture. Part of her must believe this is her last shot at making something of herself. Phyllis has something to prove, which could mean major trouble’s brewing. When Phyllis has nothing to lose and everything to gain, things don’t usually turn out well for other Genoa City residents.

Y&R spoilers say Lauren Baldwin (Tracey E. Bregman) will continue to pester Phyllis about her project. Once she finally hears all the details, she won’t be sure she can support it. Lauren has Fenmore’s to think about, so it makes sense that she won’t want to compete with Phyllis’ line. She might even team up with Jack Abbott (Peter Bergman) to make sure Phyllis’ business is hindered.

If Phyllis feels like her friend’s given her the shaft, all bets may be off. The Young and the Restless spoilers hint that Phyllis could stab Lauren in the back. She could take a page out of Ashley Abbott’s (Eileen Davidson) playbook and copy Lauren’s big ideas. Whatever Lauren has in store for Fenmore’s next could become fair game in Phyllis’ mind.

Regardless, Phyllis will inevitably put everything on the line and hope it doesn’t backfire. This is all building to the Phyllis swap that’s looming down the road. Michelle Stafford will eventually reclaim the role, but what will her Phyllis look like when she slides in? Will Stafford’s Phyllis be on top of the world and or the lowest she can possibly go?