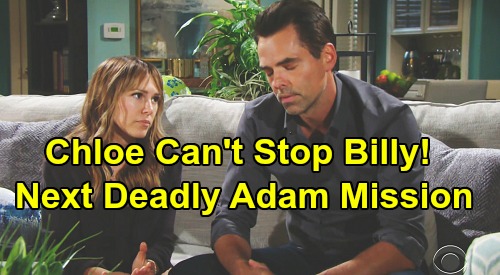 The Young and the Restless (Y&R) spoilers tease that Chloe Mitchell (Elizabeth Hendrickson) may be in over her head. She’s convinced she’s the best person to help Billy Abbott (Jason Thompson), but that may not be true. Chloe isn’t a mental health professional. In fact, she was unhinged and still trying to kill Adam Newman (Mark Grossman) just a few months ago.

Of course, Billy’s options are limited at the moment. Chloe and Kevin Fisher (Greg Rikaart) don’t want Billy’s murder attempt on Adam to be exposed, and they certainly don’t want Billy trying again. Although they wouldn’t really care if Adam were gone, they have to think about Connor Newman (Judah Mackey) as well as Victoria Newman (Amelia Heinle) and her kids with Billy.

Destroying more families isn’t what Delia Abbott (Sophie Pollono) would want. Delia would root for her father’s recovery, so that’s undoubtedly part of Chloe’s motivation. She cares about Billy and just wants him to find the freedom she’s found – the freedom from this vengeful rage against Adam.

Jill Abbott And Victoria Newman Will Be Increasingly Suspicious

However, that’ll be easier said than done since Billy has an alternate personality. Billy may not be willing to go to extremes in his normal state, but his alter is. Y&R fans know Billy’s been sedated during most of his time at the boathouse. He’s also got a leg injury, but how long can these obstacles stop his next attempt on Adam’s life? Where there’s a will, there’s a way. Billy could summon all his strength to escape at some point.

The Young and the Restless spoilers say Jill Abbott (Jess Walton) will start sniffing around soon. She popped in town to help Devon Hamilton (Jess Walton) deal with the will situation, but she may have to tackle a different problem.

Will Billy Abbott Take Yet Another Dark Turn And Carry Out His Plot?

Will Victoria share her suspicions with Jill and kick off a desperate hunt? The Young and the Restless spoilers say Jill will do her best to help Billy, but she may be too late. Does that mean Billy will indeed take another dark turn? Could he prove more successful in his next Adam plot?

Billy obviously won’t murder Adam, but he could come close if he gives Chloe the slip down the road. Based on that Jill info we mentioned, Billy could easily take drastic action once again and perhaps put Adam in the hospital this time around.