The Young and the Restless Spoilers: Thursday, September 12 – Victor Tells Nikki Startling Secret – Zoe Goes Down Thanks to Phyllis 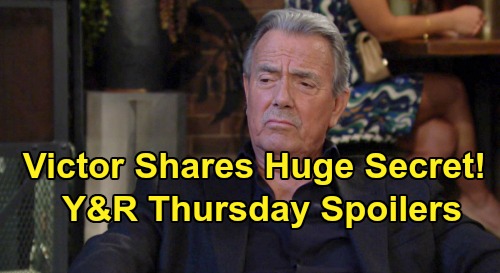 The Young and the Restless (Y&R) spoilers for Thursday, September 12, tease that Phyllis Summers (Michelle Stafford) will find herself in an unusual position. She’s typically the one being dragged down at every turn. Phyllis has done her fair share of horrible things, but so have many others in Genoa City. It’s easy to see why Phyllis gets riled since some characters’ crimes are glossed over like they never happened.

However, there’s no doubt that Phyllis’ attitude contributes to her suffering. She tends to play the martyr, but she brings the drama on herself most days. Phyllis has had some tough breaks lately, but she’ll end up emerging victorious this time around. She’ll have a chance to play the hero, which isn’t a familiar role to her.

In Wednesday’s episode, Phyllis records Zoe Hardisty’s (Anna Grace Barlow) admission of guilt. Her “gotcha” moment will give her some serious ammo against Zoe on Thursday. The Young and the Restless spoilers say Phyllis will hand over the evidence to Paul Williams (Doug Davidson) soon enough. Abby Newman (Melissa Claire Egan) and Chelsea Newman (Melissa Claire Egan) will also hear this shocking recording.

Phyllis will prove Zoe’s responsible, so it shouldn’t be hard for Paul to secure a formal confession. Zoe’s young and easily flustered, so it probably won’t be long until she’s turning on the waterworks and telling her sob story on the record. As for Phyllis, this could be her ticket back into the Grand Phoenix deal.

Y&R spoilers have suggested Phyllis would still wind up working with Chelsea and Abby. Perhaps this is how that’ll come about. They might cut her back in the deal out of gratitude – or be forced to if Phyllis only offers a trade. Regardless, Phyllis will feel like a true winner for once.

Other Young and the Restless spoilers say a startling secret will be shared. Victor Newman (Eric Braeden) will hide the truth from most of his family, but he’ll let Nikki Newman (Melody Thomas Scott) in the loop. He doesn’t like to deceive his wife, so he’ll come clean even if Nikki gets concerned.

Will this be something related to Victor’s health? Will he admit he’s worried he won’t survive the battle? Victor’s been putting on a brave face, but his recent setback could mess with his optimism. Adam Newman (Mark Grossman) tampered with Victor’s medication, so all of this feels frightening and out of the blue.

Then again, Victor may have another admission in mind. It could be about some other family matter that Vic only wants to discuss with Nikki right now. Whatever the case, The Young and the Restless spoilers say Victor will confide in Nikki and get the support he needs. We’ll give you updates as other Y&R news comes in. Stay tuned to the CBS soap and don’t forget to check CDL often for the latest Young and the Restless spoilers, updates and news.