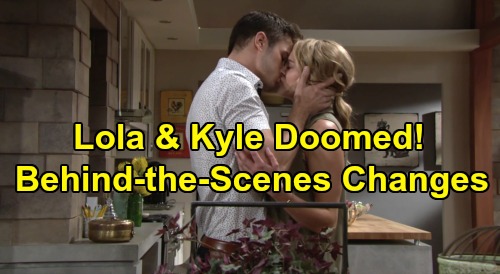 The Young and the Restless (Y&R) spoilers reveal that some changes may be brewing behind the scenes. Angelica McDaniel was recently let go as Executive Vice President of CBS Daytime as part of some restructuring within the network. That could affect what fans see on Y&R, so let’s talk about what may be ahead.

McDaniel was a reportedly a huge Rosales supporter, so that could be why we’ve seen so much of Kyle Abbott (Michael Mealor) and Lola Abbott (Sasha Calle) over the past few months. The Young and the Restless set up an intriguing love triangle after Summer Newman (Hunter King) donated part of her liver and scored Kyle as her husband.

A sham marriage usually sets up complicated feelings later or at least a surprise pregnancy. However, Summer never ended up with a bun in the oven and Kyle remained devoted to Lola. It was an odd writing decision based on how soap tropes typically go. There was very little drama, so we have to wonder if there was some interference in Head Writer and Executive Producer Josh Griffith’s plans.

The love triangle was resolved quite quickly, so maybe Griffith didn’t get a chance to do what he wanted. He made Summer more sympathetic soon after coming on the scene, which seemingly gave “Skyle” a real shot. It wasn’t like before when Summer was doing…well, “the whole ‘bitch on wheels’ routine” as Tessa Porter (Cait Fairbanks) once urged her to ditch.

Thankfully, Summer did indeed ditch that – at least the extreme version of it. She’s definitely got a softer side now, which could bring changes since McDaniel is out. Not only is McDaniel gone, her position has been eliminated. That means Griffith could have more freedom to write the stories and pairings he wants.

There are undoubtedly many factors that go into writing choices, but some things about “Kola” just feel tampered with. Take the big New York secret for example. Doesn’t taking a drunk girl to the hospital seem watered down? It’s possible Griffith had something bigger in mind that got nixed to preserve “Kola.”

Yes, Kyle paid off Zoe Hardisty’s (Anna Grace Barlow) father, but he’s changed and has proven himself. This really shouldn’t be as big of an issue as they’re making it out to be, but that’s something Y&R has always done with Kyle and Lola. Incredibly minor things like an expensive purse are puffed up to be catastrophic obstacles. Maybe that was due to some writing interference, even back when Mal Young was running the show.

Regardless, having Kyle and Lola take center stage hasn’t paid off. “Skyle’s” thrown together nuptials at the GCAC scored higher ratings than “Kola’s” wedding at the Chancellor Pavilion. The Young and the Restless surely paid a pretty penny for that extravagant fairytale, so they may rethink what they’re cooking up next.

It’s possible Lola and Kyle were originally meant to get past the storm that’s brewing, but the plan could easily shift to “Skyle” without anyone steering Griffith toward “Kola.” The Young and the Restless spoilers say some hot drama’s looming no matter what, so stay tuned. We’ll give you updates as other Y&R news comes in. Stick with the CBS soap and don’t forget to check CDL often for the latest Young and the Restless spoilers, updates and news.