The Young and the Restless Spoilers: Wednesday, September 11 – Paul Closes In On Zoe – Elena’s Stunning Confession

BY Heather Hughes on September 10, 2019 | Comments: one comment
Related : Soap Opera, Spoiler, Television, The Young and the Restless 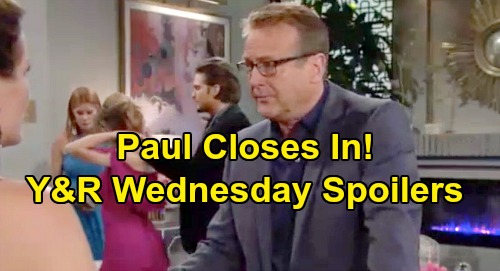 The Young and the Restless (Y&R) spoilers for Wednesday, September 11, tease that Paul Williams (Doug Davidson) will follow the trail. Tuesday’s episode plops a shocking scandal into Paul’s lap, so he’s got some work to do. Paul will need to figure out who’s behind the mass drugging at the Grand Phoenix, and Zoe Hardisty (Anna Grace Barlow) is a good place to start.

Since Zoe wasted no time in filming the loopy guests and posted the pics on her blog, she’ll find herself rising on the suspect list this Wednesday. Paul will grill Zoe soon and try to determine if she could be the culprit. Of course, Zoe will undoubtedly play dumb and act like she was just a casual observer. There’s no proof against her yet, so she may think she’s going to get away with her party sabotage.

However, Phyllis Summers (Michelle Stafford) will know Zoe has to be responsible. She warned that Zoe was out of her league during an earlier conversation and thought she got through to her. That obviously wasn’t the case, so Phyllis won’t be happy about the saboteur’s drugging decision.

Although part of Phyllis probably didn’t mind watching Abby Newman (Melissa Ordway) and Chelsea Newman’s (Melissa Claire Egan) bash implode, she never would’ve put her daughter in danger. Phyllis will have a chance to confront Zoe before long. She’ll let Zoe know she’s onto her, but Zoe may not be worried. Y&R fans can tell this blonde schemer is pretty confident in her handiwork.

Nevertheless, The Young and the Restless spoilers say Zoe will indeed go down for this eventually. Even if the security footage doesn’t point the finger at her, Phyllis can. Paul may be able to do a search of Zoe’s belongings and come up with more Molly, which is what turned the opening into a total disaster.

At the hospital, some bloodwork will be done as the effects of the drug start to wear off. Although Elena Dawson (Brytni Sarpy) wasn’t among the Grand Sangria partakers, it’d be proper procedure to have all the guests tested. After all, Paul can’t know for sure it was the signature drink at this point. Plus, this is a serious incident with potential legal implications for the hotel.

The Young and the Restless spoilers say Elena will eventually make a stunning confession, so that bloodwork could point to a bombshell. Is Elena pregnant? We certainly can’t rule it out. It could even be a secret Elena’s already been hiding. She blamed work for passing up the Grand Sangria, but maybe there was another reason why. A pregnancy would fit here.

Then again, there could be some other admission Elena makes. Whatever it is will probably involve Devon Hamilton (Bryton James), but we’d say Nate Hastings (Sean Dominic) will be the one she comes clean to. It makes sense for Y&R to drag things out a bit longer and have these pals grow closer.