The Young and the Restless Spoilers: Cait Fairbanks NOT Fired From Y&R, Actress Confirms – Tessa Porter Sticking Around 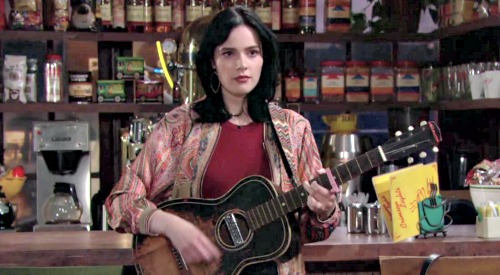 The Young and the Restless (Y&R) spoilers reveal that some fans are questioning the future of one CBS soap character. Some unreliable sites suggest that Cait Fairbanks may be out as Tessa Porter (without a single shred of evidence), but is that really true?  Cait Fairbank’s recent Tweets below makes it clear that she is not fired and was hurt by the false reports – there are some solid reasons why Tessa could be sticking around.

For starters, let’s consider the exit door that just opened and closed. Tessa could’ve been facing serious jail time for blackmailing the cover-up crew, but the charges were recently dropped. If Y&R wanted rid of Tessa, why not just throw her in prison? That would’ve made the most sense considering that departure strategy was right there and waiting.

Instead, The Young and the Restless spoilers say Tessa’s getting another shot at a music career. Her love story with Mariah is stronger than ever and Tessa’s on the right track. Her new tune was all about figuring it out, turning things around and changing for the better. That doesn’t sound like a swan song; it sounds like a new beginning.

Of course, we should also point out that Tessa is former head writer Sally Sussman-Morina’s last remaining mark on the show. Her husband, Tony Morina, took over for Mal Young as Y&R’s executive producer. One of the first big stories Sussman-Morina pitched was Mariah falling for Tessa. It seems odd for Morina to come in and immediately dump his wife’s beloved creation.

Just a few days ago, Fairbanks responded to someone’s report that she was leaving the show. When “Teriah” fans tweeted her in a panic, Fairbanks offered words of reassurance. “Everything. Is. FINE. everyone calm breaths. don’t believe things from trolls on the interweb,” Fairbanks said.

Last month, Fairbanks had already addressed the persistent departure buzz with a GIF that said, “You’re gravely mistaken.” If Fairbanks is out, then it’s obviously something The Young and the Restless blindsided her with. She’s certainly seemed hopeful about her Y&R future lately.

Let’s face it: there’s been talk of Tessa leaving since she came on the show in 2017. Sometimes people who hate characters confuse what they want with what’s actually happening. It’s important to look at facts and logic, so we’re not ready to say Tessa’s gone yet.

The Young and the Restless is by far the most conservative soap, so it benefits them to have a mild same-sex romance like Mariah and Tessa’s. They certainly haven’t been willing to push the envelope with “Teriah,” but they have two girls who overcame the obstacles and are happily in love. It gives the illusion of being progressive without offending too many people on the opposing side.

Tessa has also been a complex, wild ride of a character, so it’d be interesting to see her settle down and explore this new redeeming chapter. Bottom line, there’s no evidence that Fairbanks is departing as Tessa and the actress has called the false reports ‘rumors.’ That could obviously change since things tend to do that rapidly in the soap world, but we’ll all just have to sit tight and see how it goes.

Now! I will break from social media cause I’m deeply sensitive. Working on a thicker skin. ♥️♥️